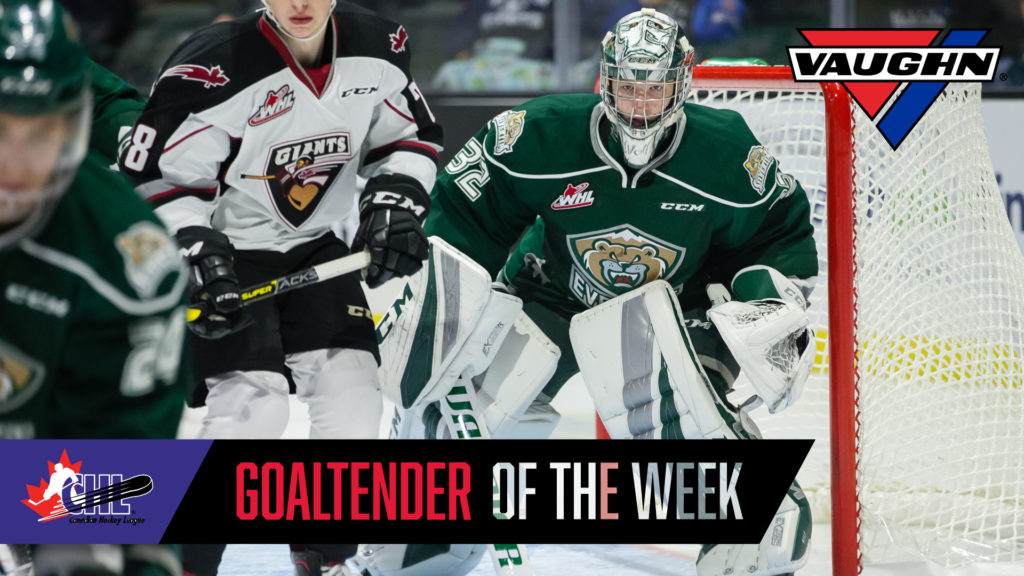 Toronto, Ont. – The Canadian Hockey League today announced that 2019 NHL Draft prospect Dustin Wolf of the Western Hockey League’s Everett Silvertips is the Vaughn CHL Goaltender of the Week for the regular season week ending January 27 with a 2-0-0-0 record including a shutout victory for a goals-against-average of 0.50 and save percentage of .984.

Wolf becomes the league’s first two-time award recipient of the season after turning aside 61 shots last week for the Silvertips, who maintain their first place status in the WHL’s U.S. Division with a 35-12-1-1 record. Wolf recorded his league-leading fifth shutout of the season on Friday with a 36-save performance that earned him first star honours in the 2-0 win over the Tri-City Americans. Saturday, he stopped 25 shots as part of a 9-1 win over the Lethbridge Hurricanes.

An 18-year-old from Tustin, Calif., Wolf was chosen by the Silvertips in the fifth round, 104th overall, of the 2016 WHL Bantam Draft. He currently leads the entire CHL with 31 wins, carrying a personal record of 31-11-1-0. His goals-against-average of 1.82 and save percentage of .930 are both among the WHL. Wolf was recently listed 17th among North American goaltenders in NHL Central Scouting’s Midterm Rankings for the 2019 NHL Draft.

Wolf and the Silvertips return to action Friday, February 1 (7:35 p.m. PT), beginning a home-and-home series against the Seattle Thunderbirds at the accesso ShoWare Centre.