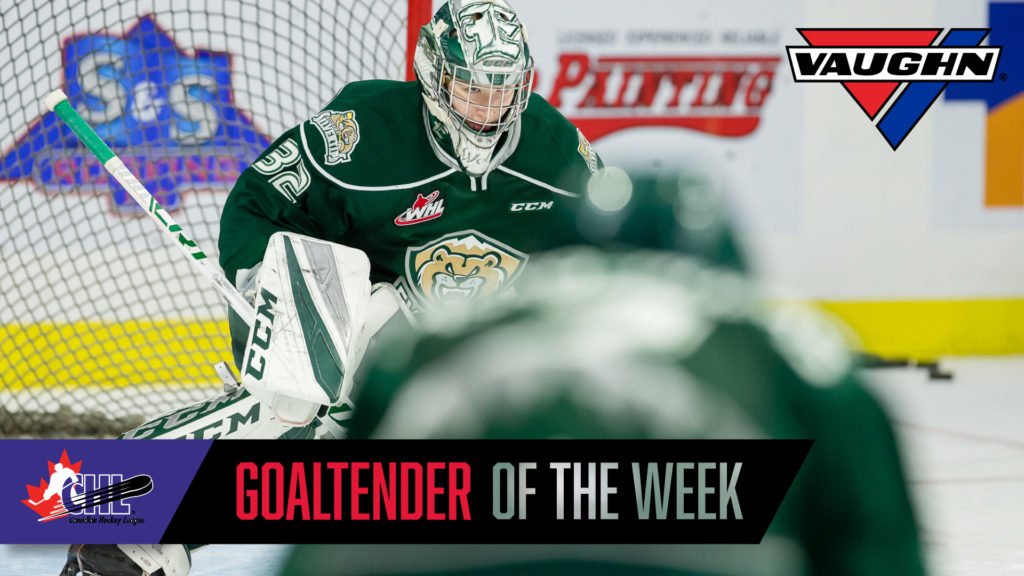 Toronto, Ont. – The Canadian Hockey League today announced that 2019 NHL Draft prospect Dustin Wolf of the Western Hockey League’s Everett Silvertips is the Vaughn CHL Goaltender of the Week for the regular season week ending December 9, posting a 3-0-0-0 record including one shutout for a goals-against-average of 1.00 and save percentage of .967.

Wolf turned aside 89 shots last week in a trio of victories for the Silvertips, who extended their winning-streak to nine games, strengthening their lead atop the WHL’s Western Conference standings. On Wednesday, he made 25 saves in a 4-2 victory over the Spokane Chiefs, then stopped a season-high 43 shots on Saturday in a 2-1 win over the Seattle Thunderbirds earning third star honours. His week wrapped up Sunday with his third shutout of the season, making 21 saves to blank the Chiefs by a 2-0 score while earning first star honours on home ice. The Silvertips have won 10 of their last 11 games and currently hold a 25-7-1-0 record chasing their third-straight U.S Division title.

A 17-year-old from Tustin, Calif., Wolf was chosen by Everett in the fifth round, 104th overall, of the 2016 WHL Bantam Draft. He’s currently tied for the league lead in wins with a personal record of 23-7-1-0 while his goals-against-average of 1.84 and save percentage of .928 are both third best in the WHL. The 5-foot-11, 160-pound goaltender was recently listed as a ‘C’ prospect by NHL Central Scouting among November’s Players to Watch List for the 2019 NHL Draft. Overall, Wolf has compiled a 36-13-1-0 record in 51 games, posting a 1.99 GAA, and a 0.928 SV%. He’s also currently tied for fifth all-time in Silvertips history with seven shutouts.

This week marks the second time in his career Wolf has been named Vaughn CHL Goaltender of the Week, earning the honours as a rookie in October 2017.

Also considered for the award was fellow 2019 NHL Draft prospect Colten Ellis of the Rimouski Oceanic who posted a 2-0-0-0 record making 61 saves for a goals-against-average of 2.00 and save percentage of .938.  In the OHL, rookie Andrew MacLean of the Owen Sound Attack won his only start of the week with 42 saves to stop the London Knights 15-game win-streak finishing the contest with a goals-against-average of 1.00 and save percentage of .977.

The Silvertips return to action Wednesday, December 12 (7:05 p.m. PT) when they head to east to take on the Spokane Chiefs.

The @VaughnHockey #CHL Goaltender of the Week is #NHLDraft prospect @dwolf2332 of @WHLsilvertips with 3W including 1SO to extend club’s win-streak to nine: https://t.co/HVRaFR8Bhr pic.twitter.com/BneSQZQVNM