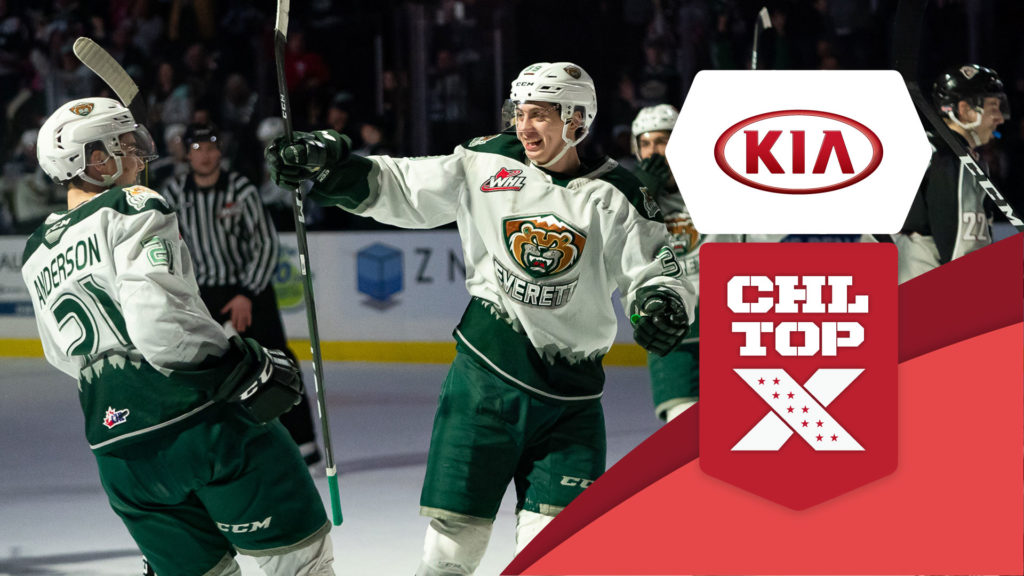 Toronto, Ont. – The Canadian Hockey League today announced the week 23 edition of the Kia CHL Top-10 Rankings for the 2019-20 season. The weekly rankings of the CHL’s Top-10 teams are selected by a panel of National Hockey League scouts.

With a 40-10-3-4 record through 57 games, the Portland Winterhawks occupy the fourth spot in the Kia CHL Top 10 Rankings this week. The Winterhawks began their week with a 5-3 win over the Seattle Thunderbirds before a 3-2 loss to Seattle and a 6-2 defeat at the hands of the Everett Silvertips. Becoming the first WHL team to reach the 40-win mark this season, the Winterhawks have posted a 23-2-2-2 record on home ice this season, ranking first in the WHL with a 0.862 winning percentage at home. The Winterhawks will now test their road record, taking on three U.S. Division teams this weekend. The trip begins Friday, February 28 (7:05 p.m. PT) at the Toyota Centre against the Tri-City Americans.

Directly behind them in this week’s rankings are the Edmonton Oil Kings, who lead the Central Division, Eastern Conference, and WHL’s overall standings with a 40-10-6-3 record. The Oil Kings claimed three wins from their four games over the past week, topping the Winnipeg ICE 5-0 and 10-1 while also beating the Regina Pats 2-1 in overtime and losing a 5-2 contest to the Brandon Wheat Kings. Rookie goaltender Sebastian Cossa earned all four victories in the season series against the ICE, posting a 0.50 goals-against average, 0.982 save percentage, and two shutouts. For their next contest, the Oil Kings will take to the road against the Lethbridge Hurricanes on Friday, February 28 (7 p.m. MT) at the ENMAX Centre.

Moving up a single spot to sixth this week, the Silvertips are rising at the right time. The U.S. Division club shutout the Moose Jaw Warriors 6-0 Wednesday, doubled up the Prince George Cougars 4-2 Friday, and then did the same to the Vancouver Giants by a 2-1 score Saturday. Sunday in Oregon, the Silvertips bested the Winterhawks by a 6-2 score. On a six-game winning streak, the Silvertips’ strength has come from a familiar source in goaltender Dustin Wolf. The Calgary Flames prospect was recognized for a perfect 3-0-0-0 week with the WHL Eli Wilson Goaltending Goaltender of the Week honours. Recording the 20th shutout of his WHL career, Wolf now ranks in a tie for fifth all-time in WHL shutouts with Dustin Slade and Justin Pogge. The Silvertips will look to extend their winning streak on Wednesday, February 26 (7:05 p.m. PT) at the Toyota Centre against the Americans.

Earning an honourable mention this week are the Hurricanes. After being dealt a 6-3 loss last Wednesday against the Spokane Chiefs, the Hurricanes rebounded with an 8-2 win over the Moose Jaw Warriors Friday. Pacing them in Friday’s win was the first hat trick of Brett Davis’ WHL career, who has posted 18 points (14G-4A) in 14 games with the Hurricanes. The 20-year-old Oakbank, Man. product now has produced 193 points (91G-102A) in 303 WHL regular season games. Up next for the Hurricanes will be the third game of a four-game home stand when the Oil Kings roll into the ENMAX Centre on Friday, February 28 (7 p.m. MT).