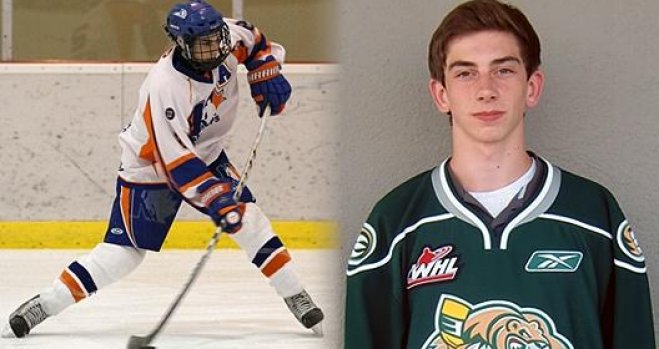 EVERETT – The Everett Silvertips today announced the signing of 1997-born defenseman Kevin Davis to a Western Hockey League Educational Contract.  Davis was Everett’s first-round selection in the 2012 WHL Bantam Draft in May.

Davis, 15, was the 11th overall pick in this year’s Bantam Draft, making him the tenth player in Silvertips history to be chosen in the first round.  Hailing from Kamloops, BC, he spent last season with the Kamloops Jardine Bantam Blazers, where he served as an alternate captain and helped his club win its league before hosting the provincial championships.

The 6-foot, 155-pound blueliner enjoyed nearly a point-per-game pace last year, scoring 15 goals and adding 31 assists to finish with 46 points in 49 games.  During the Kamloops International Bantam Ice Hockey Tournament, Davis scored three goals and totaled four points in five games on his way to being named a tournament All-Star.

“We’re very excited that Kevin has committed to the WHL and to our program,” said Everett General Manager Garry Davidson.  “He’s an impressive young player with terrific potential and upside, and it’s a big plus that he is a quality person off the ice as well.  He had the chance last month to join some of the best players in his age group at a mentorship camp put on by the NHL Players’ Association, and by all reports he played very well there.  We’re looking forward to having him in our training camp as a signed player in a few weeks.”

The WHL Scholarship encourages graduates to pursue a post-secondary education while also affording them the opportunity to continue playing hockey at an elite level in the Canadian University or College systems.  For every season a player spends in the WHL, he receives a full year guaranteed Scholarship to a higher education institution.  Each year over 300 WHL graduates attend a university or college on a WHL Scholarship.