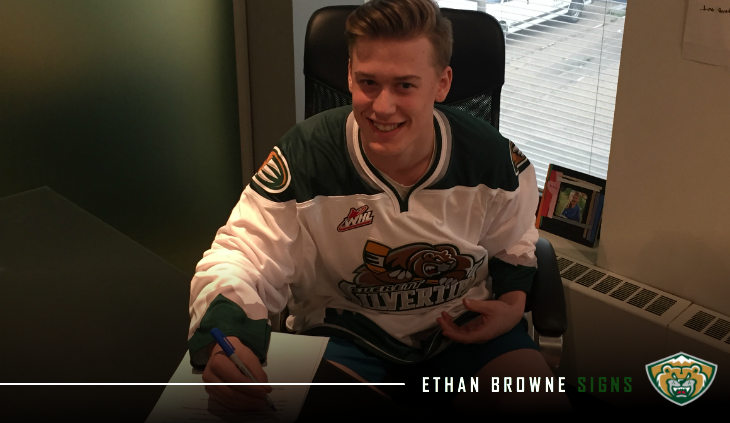 Browne was the Silvertips first round selection (14th overall) in the 2016 WHL Bantam Draft, taken as the club’s first draft choice this year.

“Getting Ethan signed was a priority of ours this offseason and we’re excited about his commitment to the Silvertips and the WHL,” said Davidson. “He demonstrates excellent offensive skills and elevated his game this past season in a league with impressive talent. We are confident about his continued development path and are looking forward to his arrival in training camp this August.”

Browne, a 2001-born forward, posted 77 points (39g-38a) in 36 games this season for the Sherwood Park Flyers Bantam AAA (AMBHL) squad, trailing only Peyton Krebs – the WHL’s first overall selection – in league scoring. He was tied for second in league scoring, ranked second in goals, and was third in assists while earning Sherwood Park’s Most Valuable Player award.

Browne was selected as an invitee to Hockey Alberta’s Under-16 Male Camp in Camrose, scheduled July 5-10. He earned league awards for outstanding forward and most sportsmanlike player, helped guide the Bantam AAA Flyers to a 31-3-2 regular season record and sweeps through the first three rounds of the postseason, where he racked up 23 points (10g-13a) in 10 games to lead the league in playoff scoring.

“Ethan’s skill set delivers elite level talent that makes him extremely fun to watch and he has a passion for the game that is similarly shared by special players,” said Silvertips director of player personnel Bil La Forge. “We’ve found that the bigger the stage, the better he plays. He has the ability to make his teammates better with his vision and demonstrated supreme confidence with being a difference maker on the power play.”

“It’s a surreal moment to sign with the Everett Silvertips,” said Browne. “It’s a great organization with a fan base that I can’t wait to see up close, and a coaching and management staff that go to great lengths to show they care for development. From here, my goal is to continuously improve my game for training camp. I can’t wait to come to Everett.”

The season prior, Browne was named Most Valuable Player of the Sherwood Park Bantam AA Sawmill Sabres and he seized the league scoring title with 114 points (58g-56a) in 32 games, leading the scoring race by 28 points.

The Silvertips will announce their training camp schedule later this summer.

The Silvertips will open the 2016-17 schedule with a “home-and-home” series against the Vancouver Giants, launching Friday, Sept. 23 in Langley, B.C. at 7:30 p.m. followed by the Silvertips home opener against the Giants, Saturday night at 7:05 p.m. at XFINITY Arena. Priority seating and guaranteed home opener tickets in downtown Everett are now available by placing a $50 deposit for Silvertips season ticket or mini-plan packages (available in full season, 22-game or 14-game plans) at www.everettsilvertips.com/season or by calling (425) 252-5100.