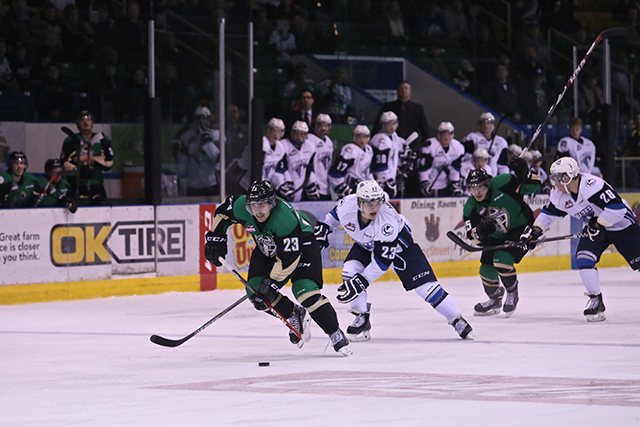 But with jobs on the line and opportunities up for grabs, it was the Everett Silvertips scoring a come-from-behind 5-4 shootout victory over the Portland Winterhawks while the Prince Albert Raiders knocked off the Saskatoon Blades by a 5-3 margin. Rounding out the evening, the Prince George Cougars needed overtime to dispatch the Kootenay ICE by a 5-4 spread.

In afternoon action from Kennewick, Wash., the Winterhawks jumped out to a 3-0 lead in the first period, courtesy a pair of markers from left winger Bronson Sharp that wrapped around another from centre Ty Kolle. But late in the opening period, Silvertips veteran Connor Dewar notched his fourth goal of the pre-season to get Everett on the board and put the wheels in motion on the comeback.

Winterhawks right winger Evan Weinger restored the three-goal advantage midway through the second, only to have Finnish import Eetu Tuulola close the gap before the period closed.

Between the pipes, 19-year-old Mario Petit went the distance for Everett, turning aside 30 of the 34 shots he faced, plus another five in the shootout.

At the other end, 19-year-old Michael Bullion also turned in a complete game for Portland, making 26 saves on 30 shots, plus another five in the shootout.

With the shootout loss, the Winterhawks fell to 3-0-1 in pre-season action. Next up, Portland takes on the Prince George Cougars on Friday (1 p.m. PDT) in Kennewick.

The victory pushes the Silvertips back to an even 2-2-1 in pre-season play. Everett will take a week away from game action before visiting the Seattle Thunderbirds Friday, Sept. 16 (7:35 p.m. PDT).

After Blades defenceman Jantzen Leslie opened the scoring with a power-play goal in the first period, the Raiders responded with three strikes in the second period as centre Cole Fonstad, defenceman Cody Paivarinta and right winger Spencer Moe all found the back of the net.

Returning import Simon Stransky made it four straight scores for the hosts, solidifying a 4-1 lead only 1:03 into the final period. By the time the final buzzer sounded, the Czech national had added two assists for a three-point night.

The Blades scraped their way back into the game as left winger Ryan Graham and import defenceman Mark Rubinchik scored late to make it a 4-3 game.

In net for the Raiders, Ian Scott saw the start, blocking 27 of 28 shots before giving way to 18-year-old Curtis Meger, who stopped 12 of 14 pucks directed his way.

Raiders forwards Drew Warkentine and Reid Gardiner recorded two assists apiece on the night, while Blades defenceman Anthony Bishop did the same on the other side of the scoresheet.

Meanwhile, the Raiders pulled to .500 in the exhibition season, improving to 1-1-0. They visit the Blades Saturday in Warman.

Back in Kennewick, the scrappy Kootenay ICE erased a three-goal Prince George Cougars lead to force overtime, but ultimately came up short as Jansen Harkins scored his second goal of the night only 53 seconds into the extra period to secure a 5-4 triumph.

The Cougars looked to be cruising early, roaring out to a 3-0 lead after 20 minutes of play as defenceman Josh Anderson, left winger Aaron Boyd and left winger Jared Bethune all tallied in the opening period.

ICE overager Matt Alfaro began to turn the tide only 1:35 into the second period, getting his team on the board and cutting the Cougars lead to 3-1.

In the final stages of the period, left winger Jared Legien notched his first goal of the night to pull the ICE within one goal.

ICE defenceman Fedor Rudakov learned a little something from Alfaro, as he scored only 1:28 into the third period to pull his club into a 3-3 tie with the Cougars.

Moments later, Winnipeg Jets prospect Jansen Harkins found the back of the net to put the Cougars on top 4-3.

If the back-and-forth affair hadn’t seen enough turns, Legien made sure to up the ante by tickling the twine with only 34 seconds remaining in regulation, knotting the game 4-4 and forcing overtime where Harkins quickly struck to end the comeback attempt for Kootenay.

Between the pipes, Ty Edmonds was given the start for the Cougars, making good on eight of nine shots before giving way to Tavin Grant, who stopped 15 of 18 shots and claimed the victory.

At the other end, 20-year-old Cranbrook product Payton Lee took to the blue paint to open the game, surrendering three goals on 19 shots before Jakob Walter came on in relief, making 22 saves on 24 shots.

Sophomore forward Max Patterson logged a multipoint effort for the ICE, claiming two assists in the loss. On the other bench, veteran forward Jesse Gabrielle and rookie defenceman Max Martin each had three assists for the Cougars.

The overtime defeat was the first outing of the pre-season for Kootenay, leaving the ICE 0-0-1. The ICE are back in action Friday (4 p.m. PDT) when they take on the Seattle Thunderbirds in Kennewick.

The Cougars improved to 2-2-0 with the nail-biting victory and will face the Portland Winterhawks on Friday (1 p.m. PDT) in Kennewick.

Friday in the WHL