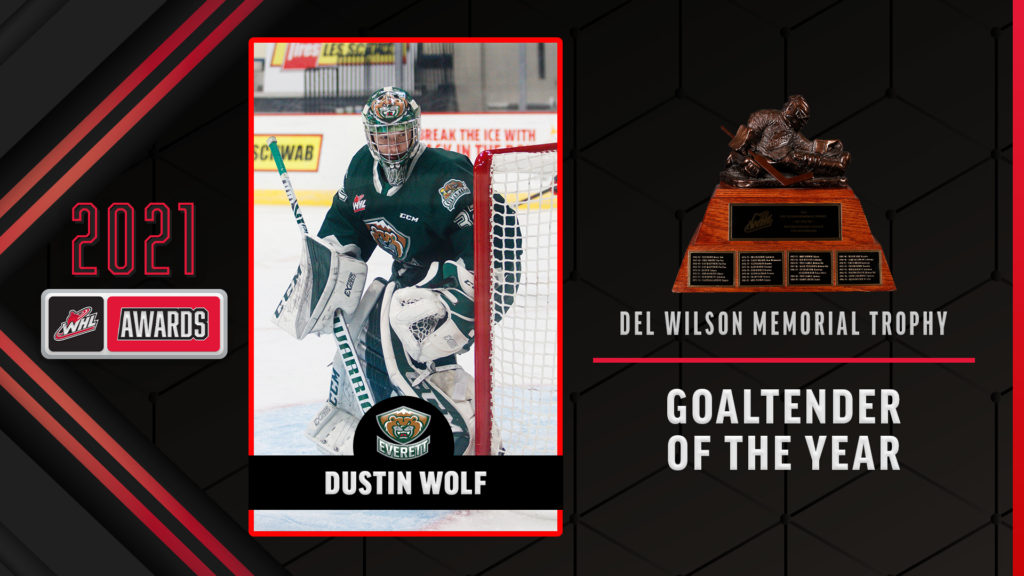 Wolf, a prospect of the Calgary Flames, helped the Silvertips claim the U.S. Division championship as he recorded a league-best 18 wins during the 2020-21 WHL season. The product of Gilroy, Calif. finished with a share of the WHL shutout lead with four while holding a 1.80 goals-against average and 0.940 save percentage, both of which were second among WHL netminders during the 2020-21 season.

The 6-foot-0, 168-pound puckstopper set a Silvertips franchise record shutout minutes streak, going 216 minutes and 27 seconds without surrendering a goal from March 20 to March 26, 2021. He also enjoyed four separate winning streaks of four games or longer, including a stretch of six straight appearances with a victory from April 16 to April 28, 2021.

The Californian netminder was originally selected by the Silvertips in the fifth round, 104th overall, in the 2016 WHL Bantam Draft. He holds a career record of 106-34-4-2, with a 1.84 GAA and 0.935 SV% in 149 career WHL regular season games. Only two goaltenders in WHL history have amassed more than the 24 regular season shutouts Wolf has totalled during his WHL career. Wolf was drafted by the Calgary Flames in the seventh round, 214th overall, in the 2019 NHL Draft.

The 20-year-old becomes the second Everett Silvertips goaltender to win the Del Wilson Memorial Trophy, joining Carter Hart who was named WHL Goaltender of the Year on three consecutive occasions from the 2015-16 through 2017-18 WHL seasons. Overall, Everett goaltenders have had their names inscribed on the Del Wilson Memorial Trophy for five of the past six WHL campaigns.

The Del Wilson Memorial Trophy honours a WHL goaltender deemed to be the most outstanding during the WHL Regular Season.

A goaltender himself, Delbert “Del” Wilson played for the Regina Abbotts and Regina Pats in the 1940s. Following the conclusion of his playing career, Wilson found success in the coaching ranks, winning 35 provincial hockey championships in Saskatchewan.

A co-founder of the WHL and long-time General Manager of the Regina Pats, Wilson played a direct role in the League’s formation. Along with Jim Piggott, Wilson helped lead the unification of all three Major Junior leagues across Canada into what is now known as the Canadian Hockey League.

Leading a group of investors, Wilson brought the Pats back into the WHL for the 1970-71 WHL Regular Season and oversaw their WHL Championship and Memorial Cup victories in 1974 as President and General Manager. Wilson maintained ownership of the Pats until 1980.

Serving as a scout in Western Canada for the Montreal Canadiens until 1995, Wilson was presented with three Stanley Cup rings throughout his 47 years of service to the NHL club.

* Also selected as CHL Goaltender of the Year