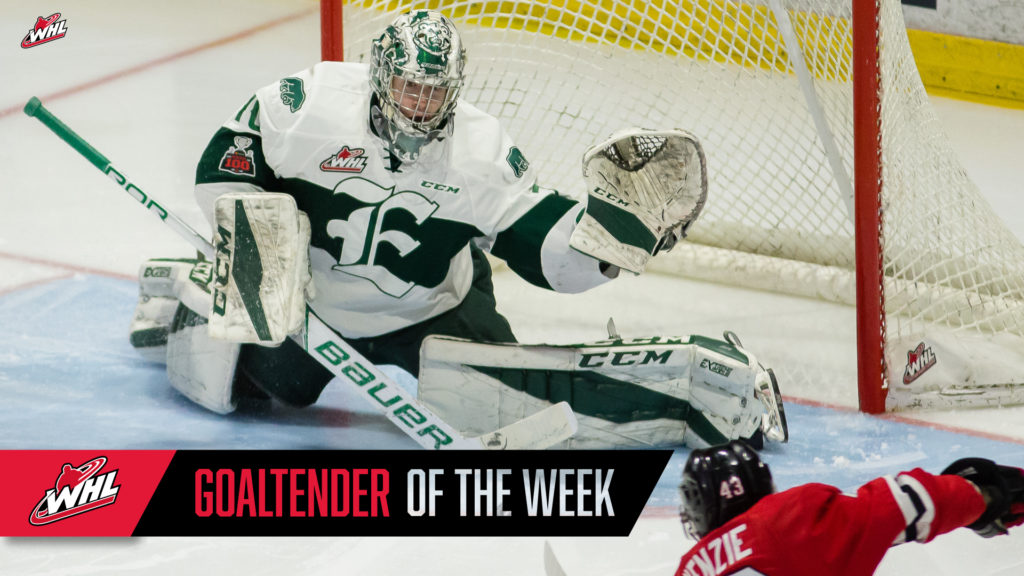 Hart, was selected by the Philadelphia Flyers in the second round, 48th overall, of the 2016 NHL Draft. This past week, Hart went 3-0-0-0, maintained a 1.41 goals-against-average, stopped 112 of 116 shots for a .966 save percentage, as the Silvertips eliminated the Portland Winterhawks to advance to the Western Conference Championship for the first time since the 2006 WHL Playoffs.

The week began on Tuesday for Hart as he stopped 40 of 42 shots in a 6-2 win against the Winterhawks. Two days later, he stopped 42 of 44 shots from the Winterhawks to keep the Silvertips a perfect 4-0 on the road in the 2018 WHL Playoffs with a 3-2 win. Friday, Hart helped to close out the series with a 30-save performance in a 4-0 win against Portland. With teammate Dustin Wolf, the pair combined for the shutout, the second time the Winterhawks had been blanked in the series. Hart was named the second star of the game for his efforts in the series-clinching victory.

As good as Hart was during the 2017-18 WHL regular season, he’s raised his game in the 2018 WHL Playoffs, sporting a 8-1-1-1 record, 1.92 GAA, .944 SV% and two shutouts to bring the Silvertips to the Western Conference Championship for just the third time in franchise history.

Hart leads all goaltenders in the 2018 WHL Playoffs for GAA, SV%, shutouts, and is tied with Lethbridge Hurricanes goaltender Logan Flodell for first in wins with eight victories. In 32 career playoffs games, Hart has now compiled a 19-13-5-0 record, 2.25 GAA, .928 SV% and four shutouts.

Hart and the Silvertips will take on the Tri-City Americans in the Western Conference Championship, with Game One schedule for Friday, April 20 (7:35 p.m. PT) at Angel Of The Winds Arena in Everett, Wash.