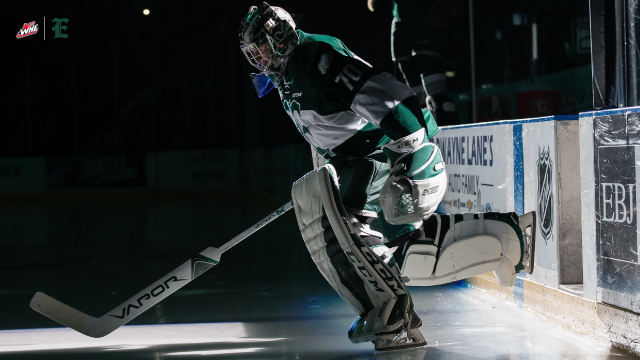 It was an ironic win of sorts as Hart blanked the visiting Giants, the same team that had rolled with Sexsmith between the pipes for so many years before to accomplish the record Hart worked so hard to attain.

It took Sexsmith four seasons and 179 games to set the previous mark of 26 shutouts. He made his WHL debut during the 2004-05 season and continued playing in the league until the 2008-09 season. Hart tied the record in game 178 of his WHL career. A 6-foot-2, 185-pound product of Sherwood Park, Alta. was originally drafted by the Silvertips in the eighth round, 158th overall, of the 2013 WHL Bantam Draft from the Sherwood Park AAA Flyers.

Since then, he’s compiled a legendary resume over the course of his junior hockey career.

His first career WHL shutout came back on September 20, 2014 as Hart stopped 26 shots to blank the Seattle Thunderbirds. He’s compiled 15 of his shutouts on home ice in front of the Silvertips faithful and 11 on the road.

The majority of his shutouts have come against opponents in his own conference with a 17-to-9 ratio between the Western and Eastern Conferences.

Hart’s shutout the Thunderbirds and Prince George Cougars the most with four clean sheets against both clubs, also silencing the Tri-City Americans and Giants three times each.

He appeared in the 2016 Sherwin-Williams CHL/NHL Top Prospects Game and has been named a WHL First-Team All-Star in back-to-back seasons (2015-16, 2016-17). Most recently, he enjoyed success on the international stage, backstopping Canada to a gold medal at the 2018 IIHF World Junior Championship in Buffalo to go along with a gold medal from the 2015 Ivan Hlinka Memorial Tournament.

His first full season in the WHL saw him record a 2.29 goals-against-average, a league-best figure. In the 2016-17 season, he once again had a league-best 1.99 GAA, also maintaining a .927 save percentage for the top figure in the league for that statistic.

The attention now shift to Hart’s pursuit of taking sole possession of the record as he and his teammates strive for career shutout 27.