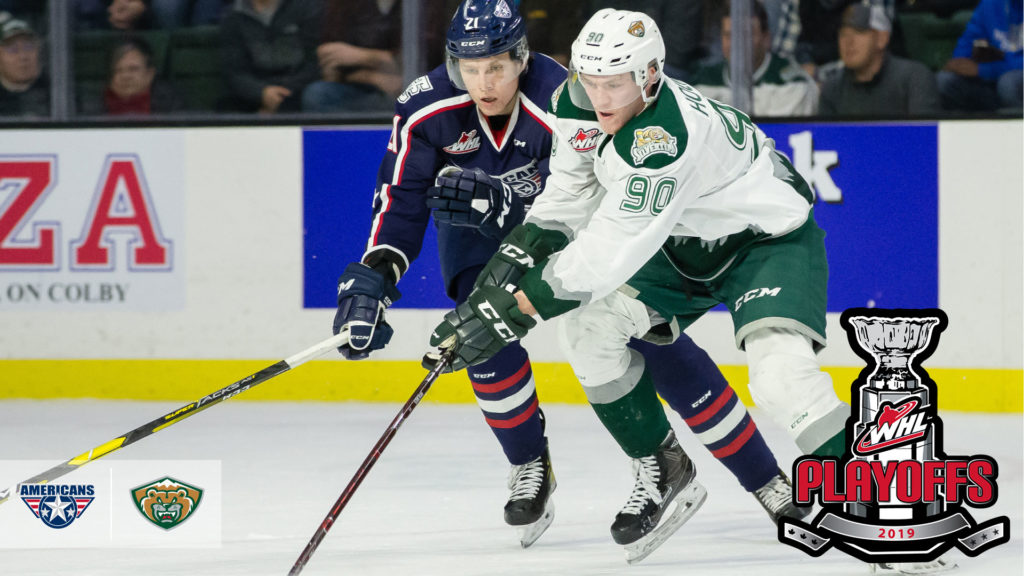 A classic U.S. Division clash will set fire to the opening round of the 2019 WHL Playoffs as the Everett Silvertips take on the Tri-City Americans.

A 2-1 win by the Vancouver Giants over the Kelowna Rockets on Friday night ensured the Giants of top seed in the WHL’s Western Conference, locking the Silvertips into the second position as winners of the U.S. Division. With the Americans posted up in the first wild-card position eight points ahead of the Seattle Thunderbirds, that set the stage for a meeting between Everett and Tri-City.

The Silvertips laid claim to the eight-game season series between the two Clubs, earning a 5-3-0-0 record, including three consecutive victories – two of the shutout variety. Most recently, Everett earned a 3-0 win over Tri-City on March 8, following one week after a 2-1 triumph on March 1. That was preceded by a 2-0 Silvertips win on January 25.

The Americans earned consecutive wins of their own, stringing together back-to-back triumphs on November 2 (4-2 at Everett) and January 4 (3-2 at Tri-City).

With 10 points (5G-5A) in eight contests, Silvertips captain Connor Dewar leads the season series in scoring, while fellow ‘Tips forward Zack Andrusiak owns the distinction of having played 10 games against the Americans this season – four as a member of the Seattle Thunderbirds and six since his arrival in Everett. He serves as a dangerous weapon as well, having registered seven points (4G-3A) over those 10 games.

Americans captain Nolan Yaremko (4G-2A) and veteran Parker AuCoin (2G-4A) share the Tri-City lead in scoring throughout the head-to-head, with both having secured six points apiece and appearing in all eight games.

Between the pipes, Silvertips goaltender Dustin Wolf has appeared in all but 4:47 of the eight games between the two rivals. He serves as the only goaltender of record for Everett at 5-3-0-0, with a 1.78 goals-against average, .930 SV% and two shutouts.

Similarly, it is Americans goaltender Beck Warm who has appeared in every single second of the season series between the two teams. At 3-5-0-0, Warm carries a 2.41 GAA and .941 SV% through the head-to-head.

Game 1 of the first-round series between the Americans and Silvertips is scheduled for Friday, March 22 (7:35 p.m. PT) at Angel of the Winds Arena in Everett. From there, the best-of-seven series will shift to Kennewick’s Toyota Center for Game 3 on Wednesday, March 27 (7:05 p.m. PT).