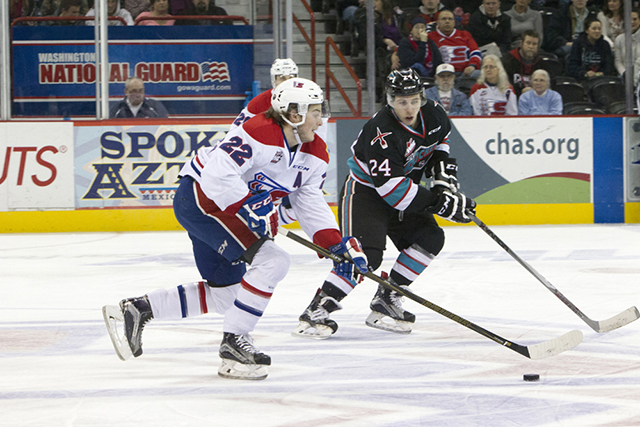 The Everett Silvertips hit two birds with one stone on Sunday afternoon, acquiring 20-year-old Austrian import Dominic Zwerger from the Spokane Chiefs in exchange for a third round pick at the 2017 WHL Bantam Draft.

“The opportunity to acquire a proven and established scorer in Dominic Zwerger was too good to pass up and we’re extremely excited to welcome him to the Silvertips family,” said Garry Davidson, general manager of the Silvertips, in a team release. “His development has taken the next step up every season and played a large role in getting noticed on the international stage.”

Zwerger, a 6-foot, 205-pound left winger from Dornbirn, Austria, led the Chiefs in goal scoring with 27 goals during the 2015-16 campaign. He also finished second on the team with 55 points in 65 games. Over a 189-game WHL career, Zwerger has amassed 60 goals and 119 points, all with the Chiefs.

He was originally a second round pick (106th) of the Chiefs at the 2013 CHL Import Draft.

The Chiefs were over the roster limit when it came to import players and overage players, so the dealing of Zwerger comes as little surprise as he checks both those boxes.

Spokane is now under within the import limit, carrying rookies Ondrej Najman and Pavel Kousal, while 20-year-olds Jayden Sittler, Keanu Yamamoto and Markson Bechtold remain in the fold as well.

For Everett, the trade pushed them above the import limit, leading to the release of forward Mario Mucka.

“It’s also extremely important to express our gratitude to Mario Mucka for his service,” Davidson said. “We wish him nothing but the best in his future endeavours.”

Mucka was in his first season with the Silvertips after being selected in the second round (100th) of the 2016 CHL Import Draft.

He skated in one game for the Silvertips this past weekend, registering one assist. Mucka, 17, stands 6-foot-3 and 181 pounds. He will be available on WHL Import waivers and if not claimed, will be enter back into the 2017 CHL Import Draft.

With the release of the Slovakian product Mucka, the ‘Tips are left with Zwerger and Finnish import Eetu Tuulola.

On the 20-year-old front, the Silvertips are carrying Zwerger, defenceman Lucas Skrumeda and forward Graham Millar.

Next on the schedule for Everett is a Friday date in Portland with the Winterhawks, while the Chiefs welcome the Tri-City Americans on Spokane on Saturday.