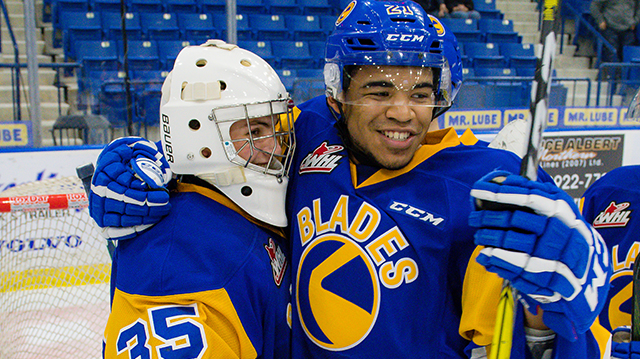 With only one game on the WHL schedule Thursday night, the spotlight was shining directly down on the proceedings in Saskatoon as the Blades played host to the Prince Albert Raiders.

For all the pundits and critics throwing shade at the Blades, Thursday might provide a little word to the wise as Saskatoon skated to a 2-0 shutout victory over the Raiders at SaskTel Centre.

Jesse Shynkaruk broke a scoreless tie 15:05 into the second period, giving the home squad a 1-0 lead and Josh Paterson added a little extra insurance in the third period as the Blades went 2-for-4 on the man advantage to derail the Raiders.

Between the pipes, Logan Flodell was sharp as he made 31 saves to collect his first shutout of the season and fourth of his WHL career.

BLADES WIN!!!! Thank you to everyone who came out and cheered us on! #RiseWithUs pic.twitter.com/11FP0BRgJ5

Despite the loss, Raiders goaltender Ian Scott was named third star for his efforts as the sophomore did everything in his power to give Prince Albert a shot. The second-year goaltender steered aside 24 pucks, but simply didn’t see the run support he needed Thursday evening.

The win propelled the Blades past the Raiders in the WHL’s East Division standings as Saskatoon moved to 3-2-0-0, while Prince Albert fell to 2-4-0-0.

The Blades, winners of two in a row, take Friday off before hosting the Portland Winterhawks on Saturday night.

As for the Raiders, they’ve dropped two consecutive contests and will aim to get back in the win column on Saturday when they visit the Swift Current Broncos.