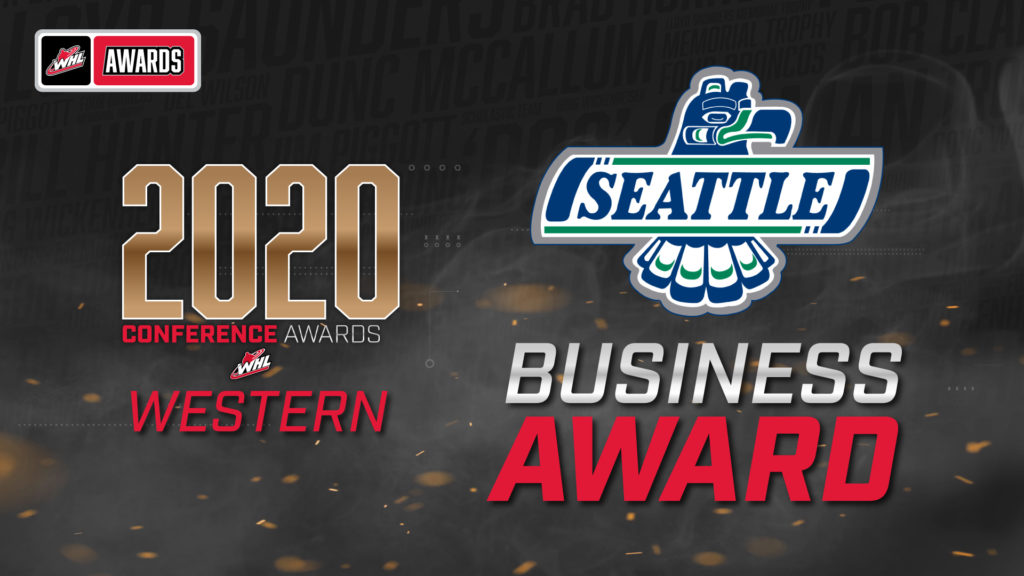 Fostering the growth of hockey in the U.S. Pacific Northwest, the Seattle Thunderbirds Hockey Club is the Western Conference recipient of the WHL Business Award.

Including their staff, corporate partners, and the passionate fans that fill their seats, a fun-first setting has cultivated a welcoming atmosphere to all who enter the accesso ShoWare Center.

Through the execution of their ‘We Are’ marketing campaign, the Thunderbirds created a unified message of support for their team on the ice while also uniting their key stakeholders

Contributing to the improved financial performance of the Club, the Thunderbirds have expanded their corporate partnerships to include two ventures with the Everett Silvertips. While rivals on the ice, the teamwork off of it has helped to strengthen both Clubs. Seeing an increase in Season Ticket revenue, the Thunderbirds have remained committed to keeping their product affordable for families to enjoy.

The inaugural WHL U.S. Challenge Cup, which took place from February 21 to 23 at the accesso ShoWare Center and Kent Valley Ice Centre in Kent. Wash., helped to generate new sponsorship opportunities while providing future WHL players with a world-class experience.

Committed to a continual betterment of the community around them, the Thunderbirds continued to be a catalyst for positive change. Holding their annual Hockey Challenge to benefit Ronald McDonald House of Western Washington and Alaska, the Thunderbirds raised $200,000 this year, bringing the overall contribution total to $6.6 million through the event’s 22-year history. In a perfect example of the Club’s selflessness, the Thunderbirds helped a rival U.S. Division club, the Portland Winterhawks, with the continued development of their Hockey Challenge Game in support of Ronald McDonald House Charities.

Founded in 2009, the Thunderbirds Community Sports Foundation has supported community sports programs in Kent, Wash. and its surrounding areas. Recently, the foundation surpassed $1 million donated, marking a significant milestone for the Club and its benefactors.

The Thunderbirds have also established a strong partnership with those in the active military service. In addition to the annual Military Appreciation Night in early November, the Thunderbirds hosted an Army vs. Navy rivalry game on February 29, 2020 with nearly 1,000 fans taking in the game.

The WHL Business Award is presented annually to the WHL member Club exemplifying a connectedness with their community through giving back while also providing fans with an unforgettable game-day experience.

The winner of the WHL Business Award will be announced on Wednesday, May 6.