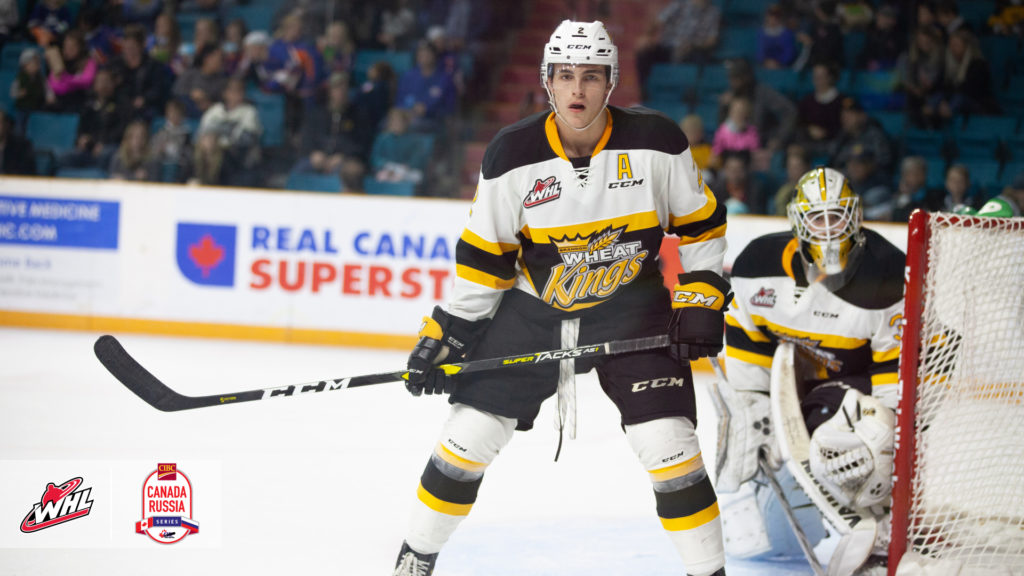 If you’re playing an organized hockey game in Prince Albert, there’s no in-between.

One only has to think back to earlier this calendar year to the deafening sounds of fans, who roared as their Prince Albert Raiders won a second WHL Championship in franchise history, culminating months of sold-out rinks, milk crates, and 6:00 a.m. camp outs for tickets.

For Prince Albert product Braden Schneider, he knows the feeling of both sides all too well. As a key member of Team WHL’s defence, he’s ready to be on the home side once more this coming Thursday in the sixth and final game of the 2019 CIBC Canada Russia Series.

“Usually Prince Albert is tough on the opposing team so going in front of them and getting to be on their side, I think it’ll be a lot more fun,” the Brandon Wheat Kings defenceman said.

Schneider still makes plenty of visits to the Art Hauser Centre, three in the 2019-20 WHL Regular Season to be exact, and still relishes the chance to be back home, even if his team isn’t greeted with the most positive welcome from the majority of fans.

“I learned a lot, met a lot of great people,” Schneider said of his time growing up in Prince Albert’s hockey scene. “Prince Albert is a hockey town so it was really special being able to go through the ranks there.”

Saskatchewan’s third-largest city can take pride in calling the 18-year-old one of their own. The former captain of the Prince Albert Bantam AA Raiders and Prince Albert Minto was the 12th-overall selection at the 2016 Western Hockey League Bantam Draft and is projected as a first-round candidate by the National Hockey League’s Central Scouting Service for the 2020 NHL Draft.

The 6-foot-2, 202-pound right-shot defenceman has also caught the attention of Hockey Canada’s scouting staff. He captained Canada White at the 2017 World Under-17 Hockey Challenge, won a gold medal at the 2018 Hlinka Gretzky Cup, and donned the red and white at the 2019 IIHF Under-18 World Championship.

This past summer, Hockey Canada called for Schneider to take part in the 2019 World Junior Summer Showcase. From across Canada, the 2001-born defenceman was one of three draft-eligible players in 2020 to make the grade.

In Hockey Canada’s Program of Excellence, the next step is making Canada’s National Junior Team and representing at the IIHF World Junior Championship.

Wednesday’s opening game in Saskatoon will feature another hometown talent in Connor Zary who, like Schneider, is looking to improve his draft ranking and hopefully catch the eye of Hockey Canada for the world’s pinnacle tournament in junior hockey.

As the pressure mounts on Schneider, he shrugs it off, noting he’s just ‘kind of accepted’ that there will be a lot at play in the games if he’s going to convince scouts he’s worthy of moving up in the rankings. That’s doesn’t mean Schneider is taking things any more seriously than he normally does though.

As for that hometown support, there is always a pocket of fans who do cheer for Schneider, even if he doesn’t don the right jersey in their minds. Family from Prince Albert and the surrounding areas will be out in full force Thursday to support him.

Though he’ll have plenty of eyes on him, determining where his hockey future will go, Schneider will no doubt appreciate the eyes of his family on him, who get to watch him represent Prince Albert, Saskatchewan, Canada, and the WHL all at once.

“Coming back to Prince Albert is always special because I have a lot of people cheering for me.”