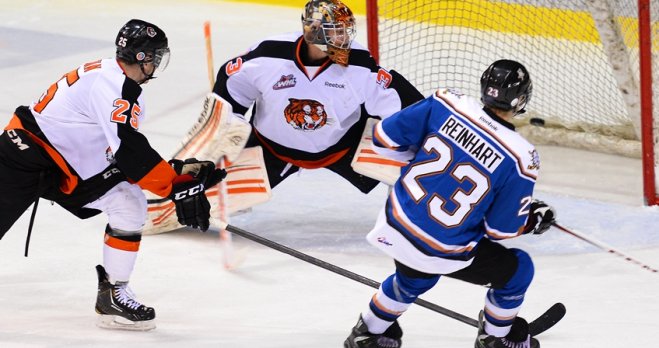 ROCKETS DOWN HURRICANES – Tyrell Goulbourne scored four goals to lead the Kelowna Rockets to a 7-1 win over the visiting Lethbridge Hurricanes in Western Hockey League action on Saturday night.

Myles Bell – with a goal and an assist – Dylen McKinlay and Ryan Olsen also scored and Cody Fowlie chipped in three assists for the Rockets (46-15-3-1), who stretch their winning streak to four games and remain five points up on Kamloops for first place in the B.C. Division.  Jackson Whistle made 25 saves in the victory.

Jamal Watson scored the only goal for the Hurricanes (26-29-3-7), who suffer their second loss in a row and fall six points behind Kootenay for eighth place in the Eastern Conference.  Ty Rimmer and Christopher Tai combined for 34 saves in the loss.

Justin Feser scored and set up two more to pace the visiting Tri-City Americans to a 5-3 win over the Seattle Thunderbirds on Saturday.

Jesse Mychan, Drydn Dow and Zach Yuen each notched a goal and an assist while Malte Stromwall also scored for the Americans (38-23-1-2), who earn the split in their home-and-home set with the T-Birds after losing at home on Friday.  Luke Lee-Knight made 25 saves in the win.

Luke Lockhart scored twice and Riley Sheen also scored for the Thunderbirds (22-36-7-1), who see their lead over Everett cut to one point for seventh place in the Western Conference.  Brandon Glover made 26 saves in the defeat.

Blake Gal’s 13th goal of the season 5:09 into the second period stood as the winner as the visiting Spokane Chiefs edged the Victoria Royals 3-2 on Saturday.

Alessio Bertaggia and Todd Fiddler also scored for the Chiefs (39-24-2-0), who defeat the Royals for a second straight night in Victoria while stretching their win streak to five games.  Eric Williams made 37 saves to record his 29th win of the season.

Brothers Jack Walker and Ben Walker each tallied a goal and an assist and Logan Nelson chipped in two assists for the Royals (32-26-2-4), who suffer their ninth consecutive setback.  Patrik Polivka made 26 saves in a losing cause.

Ty Rattie scored both goals, including converting a first-period penalty shot for the Winterhawks (51-12-1-2), who suffer their third consecutive defeat but maintain a healthy nine-point lead for first place in the Western Conference.  Mac Carruth made 21 saves in the loss.

Kale Kessy scored his 17th goal of the season – a shorthanded marker – to help lead the Kamloops Blazers to a 4-2 win over the visiting Vancouver Giants on Saturday.

Marek Hrbas, Dylan Willick and Brendan Ranford also scored for the Blazers (43-18-2-3), who built up a 3-0 lead in the second period en route to their second win in a row.  Cole Cheveldave made 24 saves to post his 33rd win of the season.

Brett Kulak and Cain Franson scored for the Giants (18-46-2-0), who went 1-for-4 on the power play as they see a three-game winning streak come to an end.  Jared Rathjen stopped 18 of 22 shots he faced to absorb the loss.

Patrik Bartosak turned in a valiant 52-save performance to post his fourth shutout and 30th win of the season as the Red Deer Rebels blanked the visiting Swift Current Broncos 3-0 on Saturday.

Turner Elson scored twice and Matt Bellerive also counted for the Rebels (36-24-4-2), who killed off five Broncos’ power plays as they post their second win in a row and move two points up on Prince Albert for fourth place in the Eastern Conference.

Eetu Laurikainen stopped 34 of 37 shots he faced in a losing cause for the Broncos (31-28-3-4), who outshot the Rebels 52-37 but could not beat Rebels’ netminder Bartosak.

Sam Reinhart scored his 30th goal of the season to help lead the Kootenay Ice to a 4-2 victory over the visiting Medicine Hat Tigers on Saturday night.

Levi Cable – with a goal and an assist – Luke Philp and Tanner Faith also scored while Joey Leach added two assists for the Ice (33-30-2-0), who took a 2-0 lead in the first period and never looked back as they move six points clear for eighth place in the Eastern Conference.  Mackenzie Skapski made 35 saves to backstop the Ice to the victory.

Miles Koules had a goal and an assist and Boston Leier also counted for the Tigers (33-30-2-1), who drop their second straight decision and now sit just one point up on Kootenay for sixth place in the Eastern Conference.  Cam Lanigan stopped 23 shots in the defeat.

Nick Buonassisi scored a pair of goals as the visiting Brandon Wheat Kings doubled up the Prince Albert Raiders 4-2 on Saturday.

Tim McGauley and Jayce Hawryluk also scored for the Wheat Kings (22-38-4-2), who coughed up a 2-0 lead but regained it with two goals in the third period.  Curtis Honey made 36 saves while posting his 10th win of the season.

Anthony Bardaro and Dakota Conroy scored for the Raiders (35-24-2-4), who outshot the visitors 38-28 but come away with the loss while dropping to fifth place in the Eastern Conference.  Luke Siemens made 24 saves in a losing effort.

Morgan Klimchuk and Chandler Stephenson each scored and set up three more as the visiting Regina Pats blasted the Moose Jaw Warriors 7-2 on Saturday.

Kyle Burroughs – with a goal and two assists – Lane Scheidl, Emil Sylvegard and Jack Rodewald also counted while Patrick D’Amico tallied his first WHL marker for the Pats (23-35-3-4), who defeat the Warriors for a second night in a row and leapfrog the Pats into 10th place in the Eastern Conference.  Matt Hewitt stopped 35 of 37 shots in the win.

Tyler Bell and Kendall McFaull scored for the Warriors (21-34-4-6), who allowed four goals on nine Pats’ power play chances as they drop their fourth straight decision.  Justin Paulic made 26 saves in the setback.