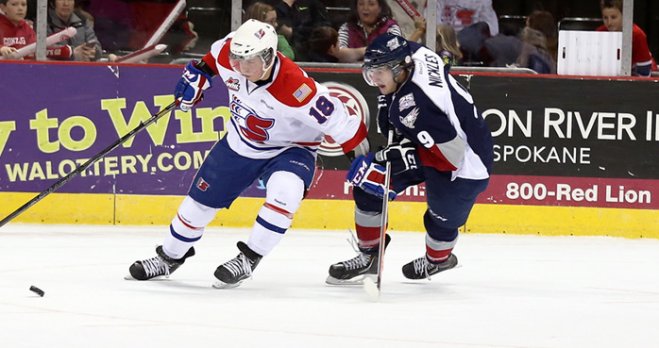 CHIEFS DOWN AMERICANS – Blake Gal scored twice and Mike Aviani tallied a goal and an assist to lead the Spokane Chiefs to a 6-4 win over the visiting Tri-City Americans in Game 2 of their Kal Tire WHL Western Conference quarter final series in WHL playoff action on Saturday night.

Liam Stewart, Tyler King and Todd Fiddler also scored while Mitch Holmberg chipped in a pair of assists for the Chiefs, who trailed 3-2 after the first period but outscored the Ams 4-1 over the final two period as they win their second straight game to start the series.  Eric Williams made 15 saves in the win.

Drydn Dow – with a goal and an assist – Parker Bowles, Marcus Messier and Jesse Mychan scored for the Americans, who went 1-for-5 on the power play as they fall to 0-2 in the series.  Troy Trombley made 24 saves in the setback.

Alex Delnov was the overtime hero, scoring 2:41 into the extra frame to lift the visiting Seattle Thunderbirds to a 2-1 win over the Kelowna Rockets in Game 2 of their Kal Tire WHL Western Conference quarter final series on Saturday.

Jared Hauf scored the tying goal10:08 into the third period for the Thunderbirds, who shock the Rockets in overtime for the second night in a row and take a 2-0 lead in the best-of-seven series back to Kent, WA, for Games 3 and 4.  Brandon Glover turned in a 21-save effort to post his second straight win.

Cole Linaker got the lone tally for the Rockets, who were held scoreless on three power play chances as they suffer their second straight loss in to open their first-round series.  Jordon Cooke made 17 saves in a losing cause.

Joel Edmundson scored twice and set up another to lead the Kamloops Blazers to a 6-4 triumph over the visiting Victoria Royals in Game 2 of their Kal Tire WHL Western Conference quarter final on Saturday night.

Tim Bozon – with two goals – Dylan Willick and Brendan Ranford also scored while JC Lipon drew four assists for the Blazers, who took a 5-1 lead into the third period and held off the Royals’ comeback attempt to claim their second win in as many nights.  Cole Cheveldave stopped 20 of 24 shots he faced in the win.

Jamie Crooks and Austin Carroll each tallied a goal and an assist while Tyler Soy and Brandon Magee also counted for the Royals, who went 2-for-5 on the power play as they come away with their second straight defeat in Kamloops.  Patrik Polivka made 23 saves in the setback.

Troy Rutkowski scored and set up two more as the Portland Winterhawks skated to a 4-1 victory over the visiting Everett Silvertips in Game 2 of their Kal Tire WHL Western Conference quarter final series on Saturday in Portland.

Ty Rattie notched a goal and an assist while Shaun MacPherson and Derrick Pouliot also found the net for the Winterhawks, who even up the best-of-seven series after losing to the ‘Tips in Game 1 of the set on Friday.  Mac Carruth stopped 10 of 11 shots fired his way in the win.

Josh Winquist got his second goal in as many games for the Silvertips, who allowed the game’s first three goals while getting outshot 34-11 in the contest.  Austin Lotz made 37 saves in the loss for Everett.

Matthew Dumba scored and set up another as the Red Deer Rebels edged the visiting Prince Albert Raiders 3-2 in Game 2 of their Husky WHL Eastern Conference quarter final series on Saturday.

Cody Thiel and Rhyse Dieno also scored and Turner Elson picked up two assists for the Rebels, who scored the game’s first three goals as they claim their second win in as many nights over the visiting Raiders.  Patrik Bartosak turned in a 36-save performance to record his second straight victory.

Jonas Knutsen and Shane Danyluk scored for the Raiders, who were shut out in the first game on Friday and didn’t beat Bartosak until the 14:15 mark of the second period on Saturday.  Luke Siemens stopped 38 of 41 shots in a losing cause.