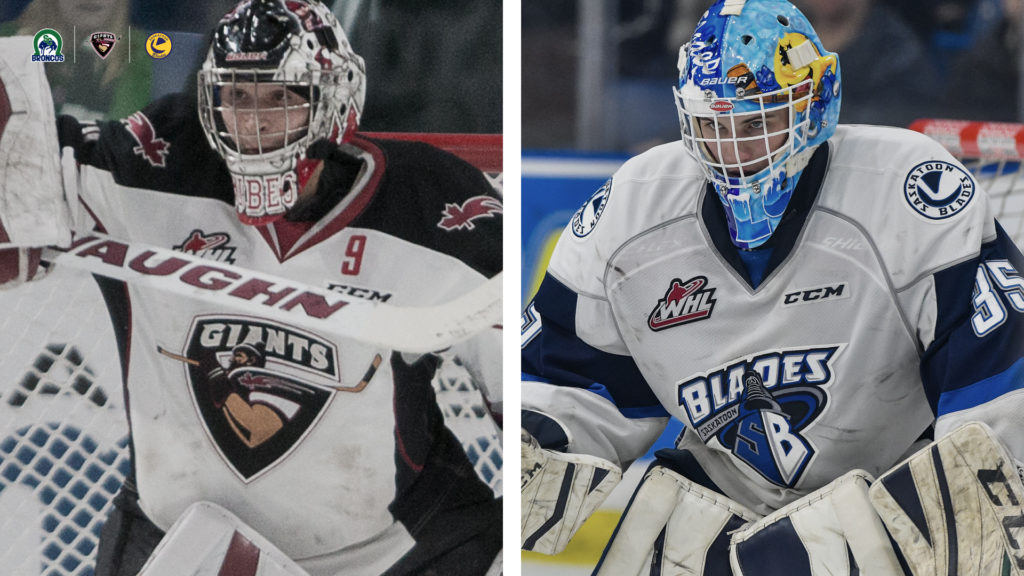 The goaltending landscape for three Western Hockey League teams changed Wednesday as the Saskatoon Blades made a pair of deals.

The first deal of the day saw the Blades acquire goaltender Ryan Kubic (1998) from the Vancouver Giants in exchange for a second round pick in the 2019 WHL Bantam Draft.

Almost immediately, the Blades made another deal, shipping goaltender Logan Flodell (1997) to the Swift Current Broncos in exchange for a fifth round selection in the 2019 Bantam Draft as well as a second round selection in 2020.

Kubic had spent his entire WHL career with the Giants, playing in 109 games dating back to the 2013-14 regular season. With the Giants, he recorded a 32-58-7-5 record while also maintaining a 3.53 goals against average and 0.895 save percentage. He also recorded five shutouts, four of which came in the 2015-16 season.

“We want to thank Ryan for his years of service and for providing the Vancouver Giants with top level goaltending,” said Giants general manager Glen Hanlon. “We wish Ryan nothing but continued success as he continues his WHL career with the Saskatoon Blades.”

Flodell will join the third WHL team of his career in the Broncos. For the Blades last season, Flodell recorded a 22-20-4-0 record as well as a 2.81 goals against average and .912 save percentage.

His career, which includes 52 games of experience with the Seattle Thunderbirds, has seen him amass a 48-35-8-1 record as well as a 2.80 goals against average and .907 save percentage. He also has six shutouts to his credit.

The moves are calculated ones by Blades general manager Colin Priestner, who solves his overager situation and gains an equally capable goaltender at the same time. Kubic set the Giants’ franchise record for saves in a single season last year with 1,681 and was named the team’s Rookie of the Year in the 2015-16 season.

“Ryan was one of only six 1998 born goalies to play for Team Canada at the World U17 Hockey Challenge and is a very athletic and confident goalie. He had three consecutive shutouts in his rookie season behind an extremely young D-core and we feel very confident with him our net for the next two seasons.” explained Priestner.

For the Broncos, things are a bit more cluttered now with a pair of 1997-born net minders between the pipes in Flodell and Taz Burman. They also have four more overagers listed up front on their pre-season roster so the Broncos could still be active in the coming days as they work to sort out that logjam.

“We’d like to thank Logan for his time and commitment to our organization and the city of Saskatoon, and wish him nothing but the best in his future.” added Priestner.

Still, it wouldn’t be a surprise to see one of Burman or Flodell eventually depart from the organization this season, but both will likely still get a chance to compete for the starting role this season.

With the Giants dealing away their long-time goaltender in Kubic, it appears the team will give last year’s backup David Tendeck and Albertville, Minn. native Todd Scott (2000) a chance to win the starting job. Tendeck appeared in 22 games last season, posting a 5-14 record, 4.78 goals against average and .856 save percentage.

Scott, who won a gold medal at the Youth Olympic Games in 2016, appeared in four pre-season contests, going 3-0 with a 2.45 goals against average and a .927 save percentage.

With this move the Giants roster now sits at 26 players: Two goaltenders, nine defencemen and 15 forwards.