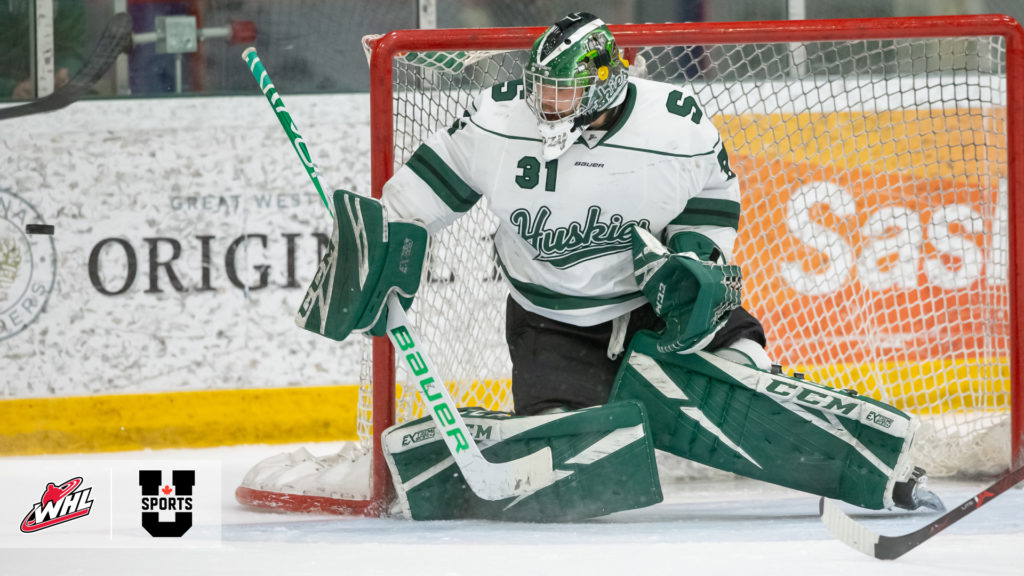 U SPORTS has announced Western Hockey League Alumni Taran Kozun as one of eight nominees for the Lieutenant Governor Athletic Awards, celebrating the national Athletes of the Year for the 2019-20 season.

A third-year Arts and Sciences student at the University of Saskatchewan, Kozun is currently accessing his WHL Scholarship to achieve his academic goals.

Since 1993-94, over 6,400 WHL Scholarships have been accessed, representing an investment of over $28 million by WHL Clubs. This season, WHL Clubs will contribute in excess of $2.8 million to 402 WHL graduates utilizing the WHL Scholarship.

The third-year netminder was dominant between the pipes for the Canada West champion Saskatchewan Huskies. The recipient of the Del Wilson Memorial Trophy as the WHL’s Goaltender of the Year in 2014-15, Kozun led the conference in every key goaltending statistic this season, posting a 1.87 goals-against average, .931 save percentage, five shutouts and 17 wins.

Canada West coaches acknowledged Kozun’s standout season, naming him both the Canada West Player of the Year and Goaltender of the Year. He would go onto become the Senator Joseph A. Sullivan Trophy winner as U SPORTS’ top player, joining Jon Barkman (2001-02) as the lone Huskies to have captured the nation’s top award.

Beginning his WHL career with the Blazers before eventually joining the Thunderbirds, Kozun appeared in 135 WHL regular season games, compiling a 64-52-7-8 record, 2.73 GAA, .912 SV% and 10 shutouts.

The winners will be determined by a combined vote of the Canadian Athletic Foundation – a not-for-profit board, chaired by His Honour Doug Mitchell – and the public on USPORTS.ca. Voting opens on June 9 and closes on June 20, with results announced on June 25 at 8 p.m. ET / 5 p.m. PT.