Saskatchewan and Alberta advance to semifinals at Canada Winter Games 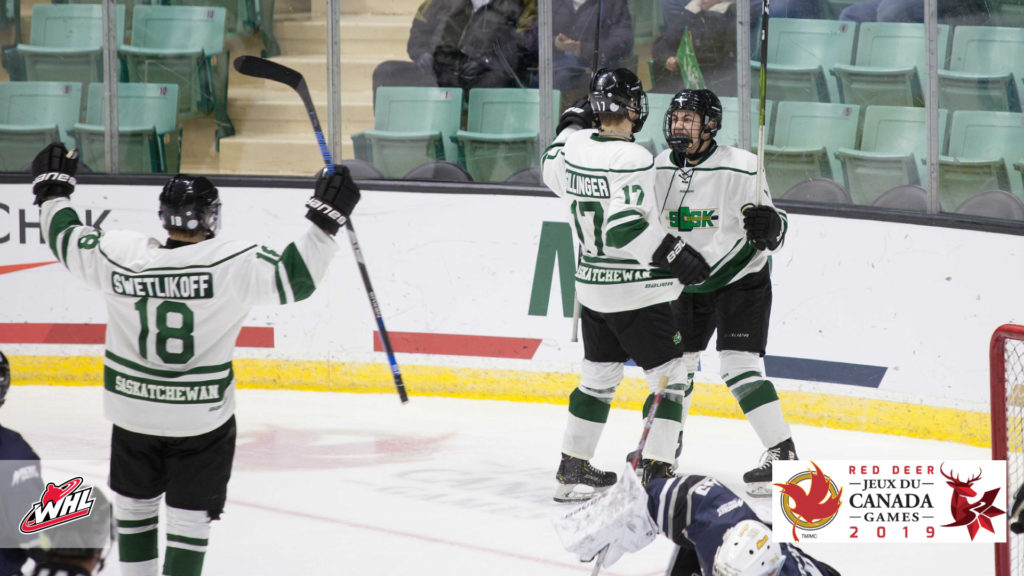 Saskatchewan, Alberta, British Columbia and Manitoba played in the 2019 Canada Winter Games quarter-finals on Wednesday, February 20, but only two teams have advanced to the semi-finals. After suffering a 7-3 loss against Québec, B.C. will move to the relegation round at Canada Winter Games; however, the hope for a Western team to medal still lives on in Saskatchewan and Alberta following their play in the quarter-finals.

In the only meeting of provincial neighbours Wednesday, Ontario doubled up Manitoba by a 6-3 score.

Three first-period goals put Ontario in a comfortable lead for the rest of the game, with Manitoba getting within a single goal twice.

Hudson Thornton (Winnipeg, Man./Prince George Cougars) and Conor Geekie each picked up an assist in the loss.

Doubling the score against Nova Scotia, Saskatchewan dominated in a 6-3 win.

Defenceman Karter Prosofsky (Saskatoon, Sask./Kootenay ICE) opened the scoring within the first 10 minutes, which was followed by a Nova Scotia goal to tie the game. In the second period, Saskatchewan scored twice with thanks to Logan Linklater (Kindersley, Sask./Prince Albert Raiders) and Gabe Klassen (Prince Albert, Sask./Portland Winterhawks) to continue the lead over Nova Scotia, who only managed one goal.

Unable to get past the ‘beasts from the East’, B.C. fell in a 7-3 loss against Québec, resulting in a move to the consolation round.

Up 1-0, Québec had an early lead in the second period, but B.C.’s Caedan Bankier (Surrey, B.C./Kamloops Blazers) was able to match the score with a short-handed rush. Later in the game, Québec’s offence exploded with a 5-1 lead until fifth overall Western Hockey League 2018 Bantam Draft selection Logan Stankoven (Kamloops B.C./Kamloops Blazers) scored two goals to B.C.’s tally in the last 10 minutes of the third. Adding another two goals to seal their win, Québec will advance to the semi-finals.

Although a very close game in the first period, Alberta dominated New Brunswick in the second and third to secure their spot in the semi-finals.

On Thursday, February 21 (4:00 p.m. MT), Québec and Saskatchewan will meet at The Centrium while Alberta and Ontario meet afterward at 7:30 p.m. MT.

The winners of each game will advance to the gold medal game on Friday, February 22 at 7:30 p.m. MT at the Centrium.

The battle for fifth through eighth place at the Canada Winter Games is also set.

At 12:30 p.m. MT, Manitoba and New Brunswick will meet at the Centrium while B.C. and Nova Scotia meet at the Kinex Arena.

In placement round semifinals Wednesday, Samuel Schofield (Yellowknife, NWT./Swift Current Broncos) had a goal and an assist in a 6-2 loss to P.E.I.