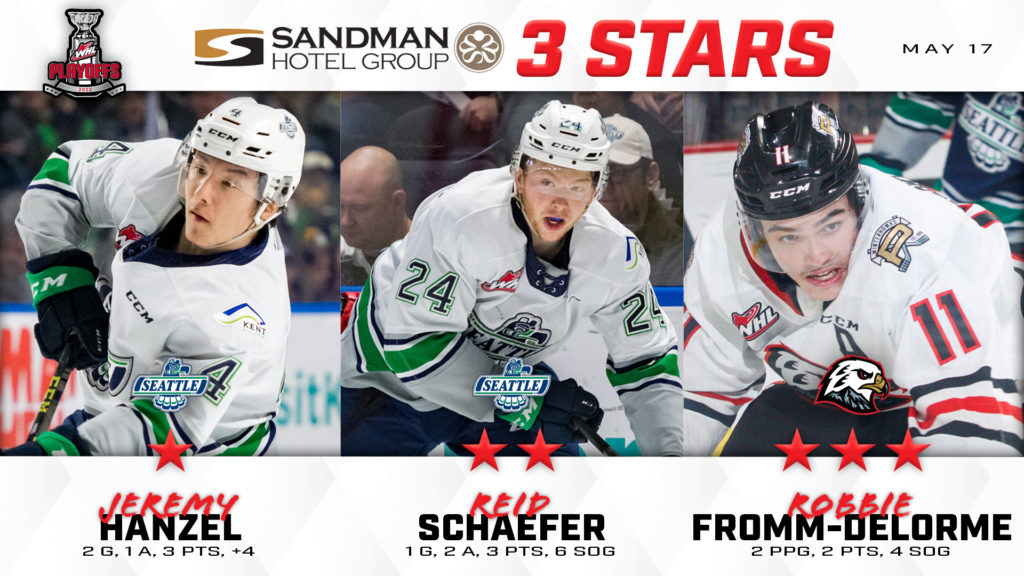 The Seattle Thunderbirds have completed their comeback, rallying from a 3-1 series deficit to capture their Second Round set with the Portland Winterhawks in seven games.

Seattle posted a 6-3 victory over Portland in Game 7 Tuesday to advance to the Western Conference Championship versus the Kamloops Blazers.

⭐ First Star – Jeremy Hanzel, Seattle Thunderbirds
The product of Coquitlam, B.C. scored twice in quick succession to help break Game 7 open in Seattle’s favour. Hanzel gave the Thunderbirds a 2-0 lead 5:48 into the second stanza, extending Seattle’s lead to 3-0 less than 90 seconds later, scoring from similar spots on the ice at the right point. Hanzel added an assist in Tuesday’s Thunderbirds win, and finished a +4.

⭐⭐⭐ Third Star – Robbie Fromm-Delorme, Portland Winterhawks
Fromm-Delorme scored twice on the power-play for Portland, striking once in the second frame and again in the third period from the edge of the crease. The product of Richmond, B.C. finished Game 7 with four shots on goal.