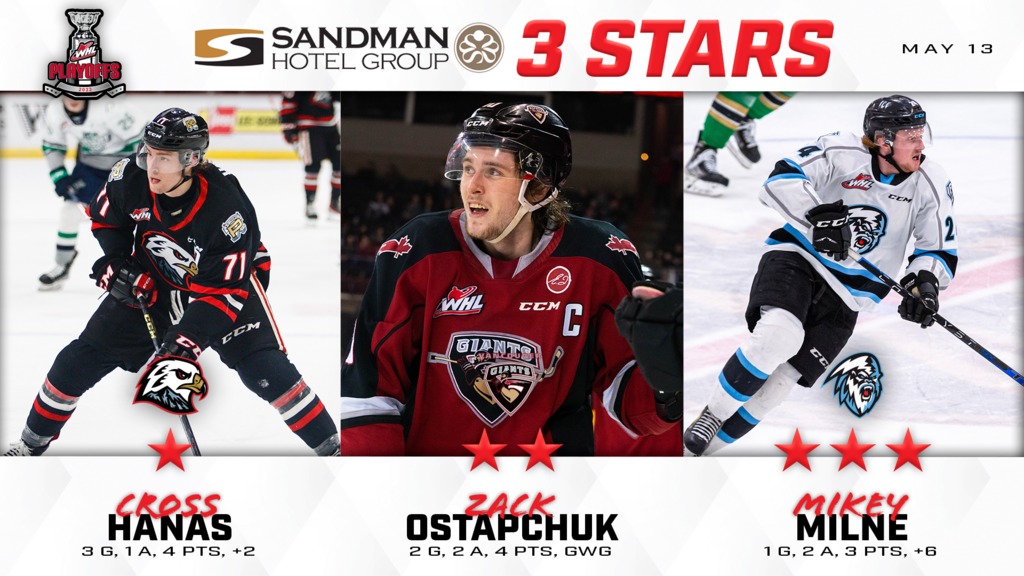 As Friday night came and went, the WHL saw three teams take home victories in each of their series. The Winnipeg ICE started off our three-game slate by wrapping up their series with the Moose Jaw Warriors in just five games, while the Vancouver Giants and Portland Winterhawks took home wins but were unable to put their matchups to bed.

Red Wings prospect Cross Hanas had himself an excellent Friday night, as he bagged three goals and one assist in a 5-1 Winterhawks victory. Hanas was also able to collect a triple crown in goal scoring, securing an even strength, power play, and short handed goal in the contest.

After he lay claim to the first star of the night on May 12, Senators prospect Zack Ostapchuk was able to keep up his torrent pace for the second consecutive night. With another two goal and two assist performance in Game Five between the Blazers and Giants, Ostapchuk continues to hold top spot among point scorers in the WHL playoffs with 23.

The Winnipeg ICE were able to move on to the Eastern Conference final on Friday night with a six-goal night against the Warriors. Although he only registered three points on the night, Mikey Milne had his hand in each of Winnipeg’s six tallies — literally. The Abbotsford, BC native had a stat line of one goal, two assists, and a plus/minus of +6 as the final buzzer sounded.