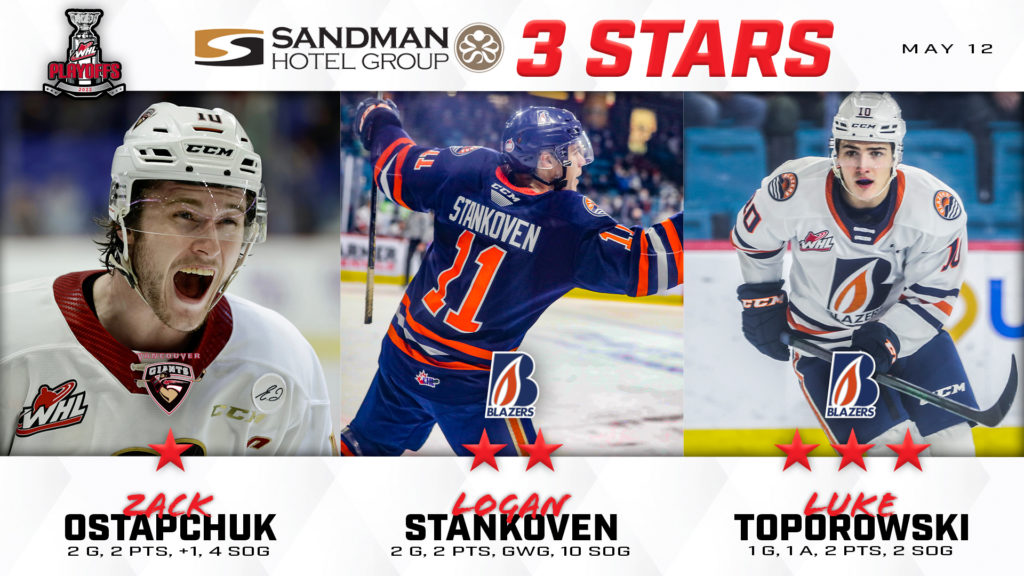 The lone Thursday night contest on the 2022 WHL Playoffs schedule spotlighted yet another tightly-contested B.C. Division rivalry game between the Kamloops Blazers and Vancouver Giants.

A nail-biting tilt between the two Clubs was determined late in the proceedings as Dallas Stars prospect Logan Stankoven converted on a power-play effort to give his Club the victory, and with it a commanding 3-1 lead in the best-of-seven series with the Giants.

Ottawa Senators prospect Zack Ostapchuk showed why he is the heart and soul of this Giants squad, registering two goals, including a dazzling effort on a breakaway late in the first period to tie the game at 1-1.

Dallas Stars prospect Logan Stankoven smelled blood in the water when the Blazers were awarded a late power-play opportunity and he made the Giants pay. After missing on his first chance on the 5-on-4 advantage, Stankoven made good on his second one-timer attempt to give the Blazers a 3-2 edge with only 2:37 to play in regulation. He went on to add his second goal of the night and ninth of the post-season – an empty-netter to seal the deal with eight seconds to go.

The veteran forward started the scoring just past the midway point of the first period, recording his sixth goal of the WHL Playoffs to give the Blazers a 1-0 lead. The product of Bettendorf, Iowa, added a secondary assist on Stankoven’s game-winning goal to round out a two-point night.