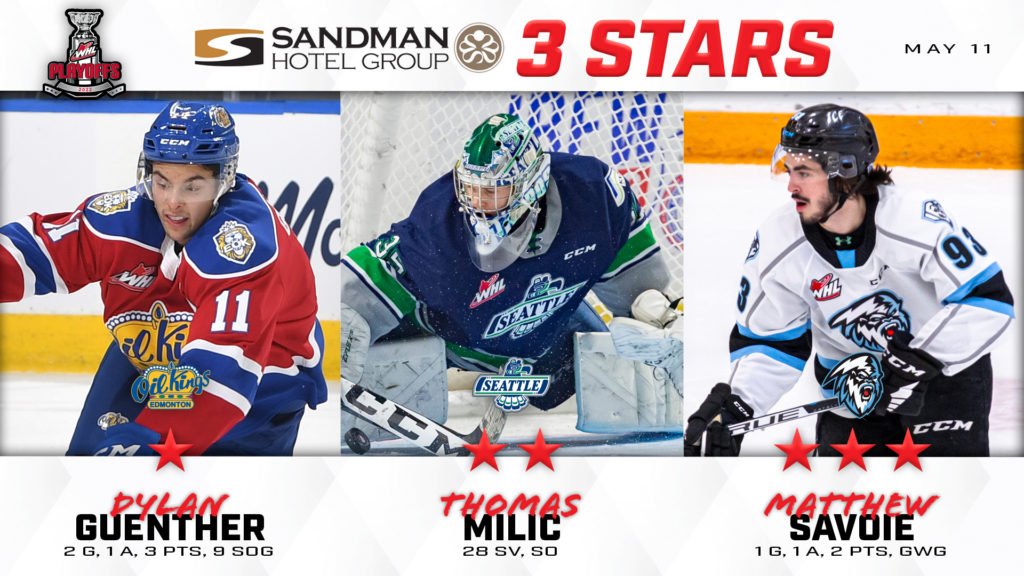 The Edmonton Oil Kings became the first Club to advance to the Conference Championships following a four-game sweep of the Red Deer Rebels. Edmonton improved its 2022 WHL Playoffs record to 8-0 thanks in part to a two-goal effort from Arizona Coyotes prospect Dylan Guenther.

Elsewhere, the Winnipeg ICE claimed a 3-1 series lead in their second-round set with the Moose Jaw Warriors, while Thomas Milic and the Seattle Thunderbirds blanked Portland 5-0 to earn their first victory in that U.S. Division showdown.

⭐ First Star – Dylan Guenther, Edmonton Oil Kings
Guenther extended his goal-scoring streak to eight games with a pair of markers in Game 4 at Red Deer. The Edmonton, Alta. product was deadliest in the opening minute of the second period, scoring eight seconds into frame before setting up linemate Carter Souch on an odd-man rush less than a minute later. Guenther rounded out his night with a power-play goal with 1:26 remaining in the middle stanza.

⭐⭐ Second Star – Thomas Milic, Seattle Thunderbirds
2022 NHL Draft prospect Thomas Milic turned aside all 28 shots he faced Wednesday, including 11 in the second period, as Seattle upended Portland in Game 3 of their second-round series. The Thunderbirds earned their first victory of the best-of-seven set, and now return home for Game 4 Friday night.

⭐⭐⭐ Third Star – Matthew Savoie, Winnipeg ICE
2022 NHL Draft prospect Matthew Savoie helped the Winnipeg offence get back on track in Game 4 in Moose Jaw, scoring once and adding an assist in a 5-3 victory. His goal at 13:38 of the second period stood up as the game-winner, as Winnipeg increased its lead to 3-1 in the best-of-seven series.