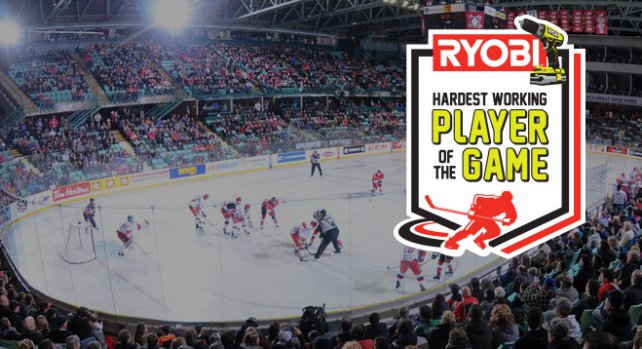 Calgary, AB- The Western Hockey League is pleased to announce Ryobi as the new title sponsor of the Hardest Working Player of the Game program recognizing a player each game who best demonstrates dependability, quality of play and overall commitment. This partnership between Ryobi and the WHL aligns their shared commitment to hard work both on and off the ice. Both partners are dedicated to recognizing those players who honour that commitment.

“Ryobi is thrilled to partner with the Western Hockey League to recognized star players who demonstrate the utmost level of dependability and outstanding skill,” said Mitch Dennehy, VP of Sales & Marketing with Ryobi Canada. “We stand behind our communities and look to partner with first-class organizations. Sports play an integral role in shaping the lives of our younger generations and we’re proud to recognize the outstanding efforts of these players.”

“The WHL is excited to introduce Ryobi as our new title sponsor of the Ryobi Hardest Working Player of the game award”, commented WHL Commissioner Ron Robison.  “WHL Players are well known for their strong work ethic and this will recognize their outstanding efforts throughout the course of the season.”

Throughout the season, the WHL will keep a tally of the players recognized as the Ryobi Hardest Working Player of the Game. This program will be activated across 16 teams in the Western Hockey League.  At the end of the season a player from the WHL will be crowned the ‘Ryobi Hardest Player of the Year’ and will win a $2000 scholarship and a Ryobi 6pc combination kit courtesy of Ryobi Power Tools.

As one of the world’s largest and most innovative power tool manufacturers, RYOBI® power tools specializes in making pro-featured power tools truly affordable. That’s why RYOBI® is the brand of choice for millions of homeowners, woodworkers, hobbyists, craftspeople, and value-conscious contractors.

RYOBI® has built its reputation by leading the way with innovative products that continuously deliver the features and performance customers have come to know and trust.  Products like the 18 Volt ONE+ lineup, featuring over 50 cordless tools that run on the same battery or the Hybrid 18 Volt corded and cordless trimmer which never runs out of power. With RYOBI, anything is possible, if you have the right tools.