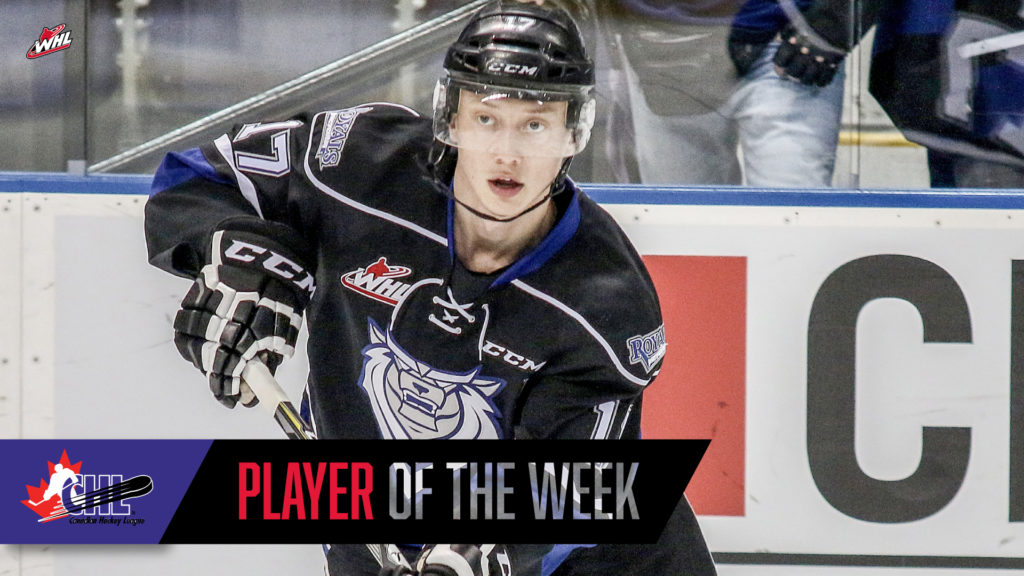 Toronto, ON – The Canadian Hockey League today announced that Anaheim Ducks prospect Tyler Soy of the Victoria Royals is the CHL Player of the Week for the week ending October 15 after registering 12 points in four games including three goals and nine assists with a plus-minus rating of plus-6.

Soy’s 12 points were spread across four multi-point performances helping the CHL’s top ranked Royals maintain first place in the WHL standings collecting five of a possible eight points last week.  It began with a two-game home series against the Tri-City Americans with Soy scoring once with two assists on Tuesday in an 8-2 win, then Wednesday where he contributed two assists despite a 5-4 overtime loss.  His week continued Friday night with another three-point effort scoring a goal and two assists as the Royals suffered an 8-6 road loss to the Spokane Chiefs, then wrapped up Saturday in Seattle with four points including a goal and three assists as first star of a 6-1 victory over the Thunderbirds.

A 20-year-old from Cloverdale, BC, Soy is playing in his fifth career WHL season with the Royals who selected him eighth overall in the 2012 WHL Bantam Draft.  Soy now has 13 points in just five games after producing 25 goals and 30 assists for 55 points in just 44 games played last season.  Soy enjoyed an extended look with the Ducks organization this fall and was a seventh round pick of the club in the 2016 NHL Draft.

Also considered for the award this week was Maxime Fortier of the Halifax Mooseheads with two goals and five assists for seven points in three games, and NHL Draft prospect Brady Hinz of the Sarnia Sting with six goals and three assists for nine points in four games.