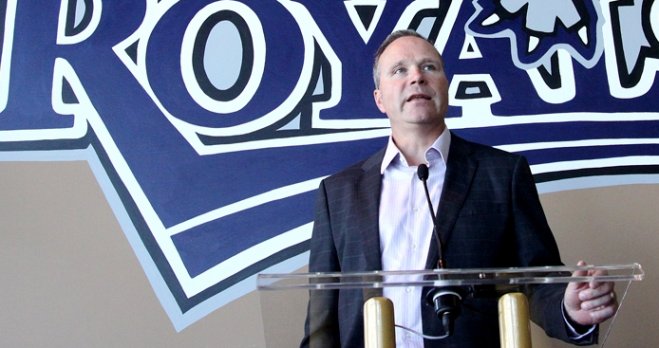 Victoria, BC – The Victoria Royals are proud to announce that Dave Lowry has been named the second head coach in the team’s history and third in the franchise’s history.

Lowry has spent the past three seasons as an assistant coach with the Calgary Flames of the National Hockey League (NHL). Lowry worked under Brent Sutter during his tenure with the Flames, and helped guide the team to a 118-90-38 record over that span.

“We are very excited to have Dave join our team,” Royals owner Graham Lee said. “Our goal for the Royals organization is to create an environment for players to succeed. Dave brings experience and a winning track record at the WHL level that will help us achieve our goal.”

Previous to his time with the Flames, the 47-year-old was the head coach of the Western Hockey League’s (WHL) Calgary Hitmen during the 2008-09 season. Behind the bench for the Hitmen, Lowry led the team to a WHL-best 122 points with a 59-9-3-1 regular season record. The team won the Eastern Conference Championship that season before bowing out in six games versus the Kelowna Rockets in the Ed Chynoweth Cup finals. During the 2009 playoffs Lowry’s Hitmen earned a 14-4 record.

“There were many accomplished and qualified candidates for this position,” Royals’ General Manager Cam Hope said, “but Dave was our clear choice after our first meeting. His experience coupled with our similar philosophies on both the management and structure of a hockey team secured my decision he was the right person for the position.”

The Sudbury, ON native began his coaching career under head coach Kelly Kisio with the Hitmen during the 2005-06 season.  For the 2007-08 season Lowry was promoted to Associate Coach. The following year he would take the reigns as the team’s head coach.  In total, the Hitmen compiled a record of 133-63-7-12 during the three seasons Lowry was an assistant and associate coach. Also during that time in Calgary qualified for the WHL Playoffs earning a trip to the second round each season while compiling a 24-23 record.

“The prospect of returning to the WHL in Victoria was an opportunity I couldn’t pass up,” Lowry said. “This organization is committed to doing things properly, and I am looking forward to the opportunity to work with both Graham and Cam and continuing the development of the franchise to the highest levels. This team has a collection of talented players returning and I am eager to start the season.”

Lowry enjoyed a 19-year playing career that began when he was drafted by the Vancouver Canucks in the 6th round (110th overall) of the 1983 NHL Entry Draft. For his career, Lowry played for five NHL teams (Vancouver, St. Louis, Florida, San Jose and Calgary) amassing 1084 games and recording 351 points (164g-187a). He captained the Calgary Flames during the 2001-02 season.