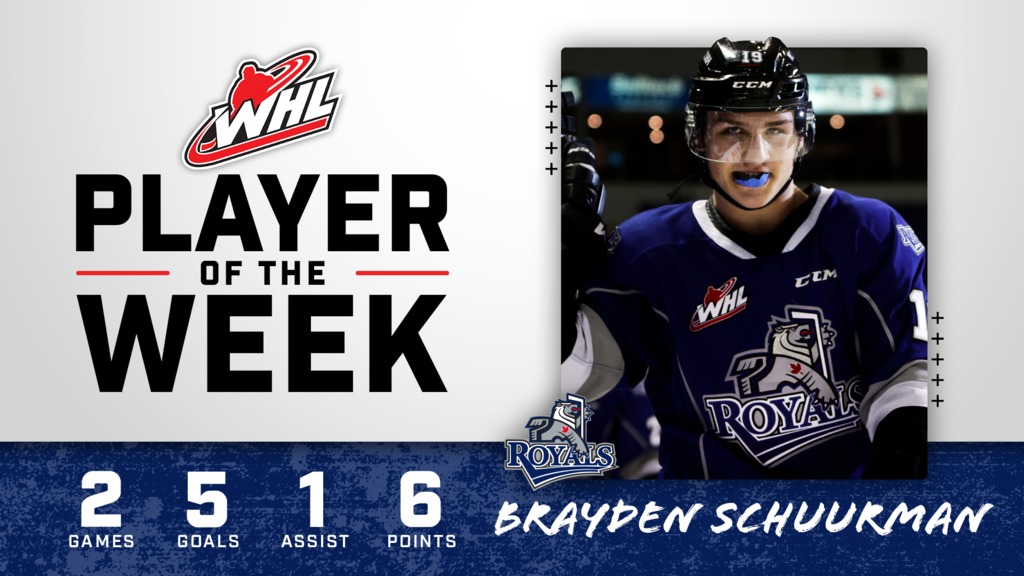 Schuurman, an 18-year-old product of Abbotsford, B.C., registered six points (5G-1A) in two games this past weekend as the Royals split a two-game set with the Kelowna Rockets.

On Friday, October 8, the 5-foot-9, 188-pound centre scored his first career WHL hat trick including the game-winning goal, finishing the evening with four points as Victoria doubled up Kelowna 6-3. He was named the game’s first star.

Saturday, October 9, Schuurman recorded his third career multi-goal game, scoring twice as the Royals dropped a 6-4 decision to the Rockets.

Schuurman’s six points were tied for the most among WHL skaters this past week: Washington Capitals prospect Bear Hughes put up six points in three outings with the Spokane Chiefs.

Schuurman, who is eligible for the 2022 NHL Draft, has matched his goal total from the 2020-21 WHL season (five) in just three appearances with Victoria this fall.

The Royals originally selected Schuurman in the fourth round (69th overall) of the 2019 WHL Draft. In 26 regular season outings, all with Victoria, he has recorded 17 points (10G-7A).

Schuurman and the Royals are back in action this evening as they open a two-game home series with the Kamloops Blazers (7:05 p.m. PT, Save-On Foods Memorial Centre).