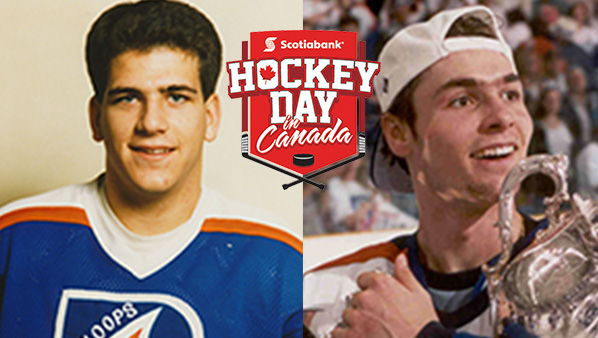 Kamloops, BC – The Western Hockey League (WHL) announced today the rosters for the WHL’s 50th Season Pro Am Alumni Game on Thursday, February 4, as part of the Scotiabank Hockey Day in Canadacelebrationsin Kamloops, BC.

The puck will drop on the WHL’s 50th Season Pro Am Alumni Game at 7:30 p.m. on Thursday, February 4, at the Sandman Centre in Kamloops. The event will feature former Kamloops Blazers greats Mark Recchi and Darcy Tucker captaining teams made up of NHL and WHL alumni as well as celebrity guests in a fun, family-oriented game.

“The WHL is thrilled to have so many of our alumni return to help us celebrate the WHL’s 50th Season with this historic pro-am game,” commented WHL Commissioner Ron Robison. “We appreciate the opportunity our broadcast partner Sportsnet has provided to be part of Scotiabank Hockey Day in Canada and look forward to Kamloops welcoming back many of the top WHL and Blazers players of all time.”

Team Recchi will be captained by former Kamloops Blazer Mark Recchi and boasts a roster with over 8,000 NHL games played. Recchi played 1,652 of those games himself and is a three-time Stanley Cup champion. In total, Team Recchi’s roster has also played in 2,320 WHL games and recorded 4,320 NHL points. Former New Westminster Bruin Cliff Ronning will also suit up for Team Recchi and still sits second all-time in the WHL record books with his 197-point campaign in 1984-85.

Team Tucker will be led by former Kamloops Blazers great Darcy Tucker. Part of each of the Blazers’ record three Memorial Cups in four years in the mid-90s, Tucker went on to an NHL career that spanned 947 games. In total, Team Tucker has played in over 7,500 NHL games and includes Hockey Hall of Famer, and former Medicine Hat Tiger, Lanny McDonald. McDonald won a Stanley Cup with Calgary in 1989 and owns 1006 of Team Tucker’s 3,784 career NHL points. Team Tucker has a little more WHL flavor than Team Recchi, with 2,951 career WHL games played. Former Blazer Rob Brown will also suit up for Team Recchi and sits fourth in WHL history with 522 career points. Brown also still holds a WHL record with 212 points recorded during the 1986-87 season.

Last week, the WHL announced that Canadian country music star Gord Bamford will suit up in the game. Kamloops fans will have a chance to be Gord Bamford’s guest at the Scotiabank Hockey Day in CanadaCelebrity Luncheon on Thursday afternoon, and to receive tickets to cheer Gord on at the Pro Am game, courtesy of Kamloops Country 103. Fans are encouraged to listen to Country 103 for contest details.

Fans will also have an opportunity to bid on all player jerseys and receive them off the players’ backs, on-ice at the conclusion of the game. Proceeds from the jersey auction will be donated to KidSport (www.kidsportcanada.ca), a charitable organization that provides financial assistance to kids who want to play organized sports.  Both the WHL and Gord Bamford have long been supporters of KidSport. In addition to the jersey fundraiser, the Gord Bamford Foundation has pledged $125,000 to the organization over a five-year commitment.

Tickets for the WHL 50th Season ProAm Game are available now at the Sandman Centre Box Office (250-828-3339) or Sahali TicketMaster (Adults/Seniors/Youth-$10 plus tax; Children 12 and under $5 plus tax).

All tickets $5.00-available at the Sandman Centre Box Office

Tickets are available at the Sandman Centre Box Office

A number of other free, local community activities will also take place throughout the community over the multi-day hockey celebration, including an Opening Ceremony at Sun Peaks on Wednesday, February 3, public viewings of the Stanley Cup®, the Memorial Cup, school visits and minor hockey clinics. On Saturday, February 6 at Sandman Centre, hockey fans will enjoy a youth road hockey tournament, Sportsnet’s live 13-hour broadcast featuring all seven all seven Canadian NHL® teams in action, NHL Alumni™ autograph sessions, free merchandise, and a Blazers pre-game party. The weekend will also play host to Scotiabank’s Community HockeyFest event, where sponsored minor hockey teams can participate in an on-ice clinic with NHL Alumni™.

Scotiabank Hockey Day in Canada is a nationally televised event, produced by Sportsnet. Each year a host city is selected from a number of applicants, with the 2016 event to be hosted in Kamloops, BC.

Located in the southern interior between Vancouver and the Alberta border and with a population of 87,000, Kamloops is a thriving hub of business, arts, culture, sport and recreation. With more than $60 million invested in new and improved sport venues, Kamloops is proudly known as Canada’s Tournament Capital. Home to the largest Minor Hockey Association in BC as well as the WHL Kamloops Blazers, Kamloops has a long and storied history in hockey. To learn more about Kamloops, visit www.kamloops.ca.