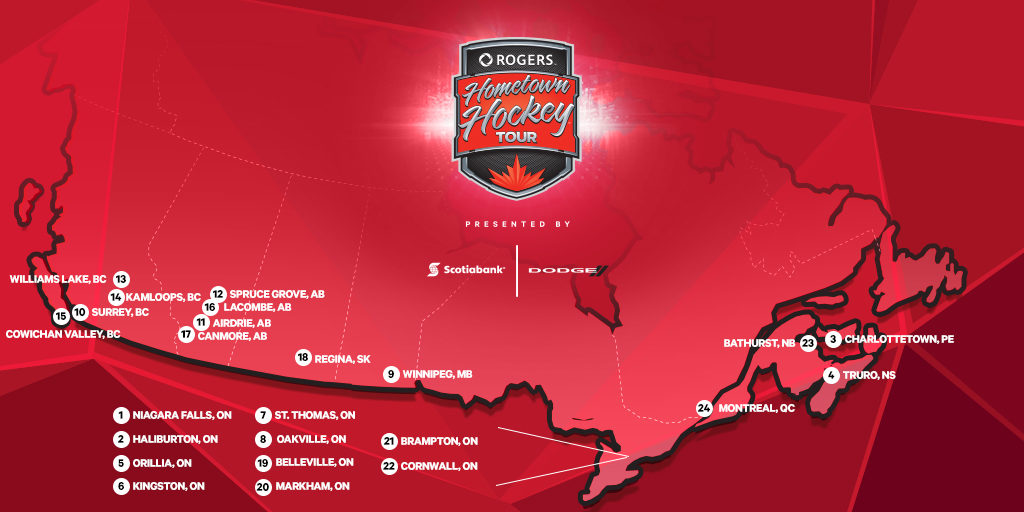 In just over a month, the crew from Rogers Hometown Hockey is set to return for a fourth season with six WHL markets scheduled to play host throughout the 2017-18 season.

Free of charge and open to fans of all ages, each weekend’s jam-packed two-day festival features live entertainment, local celebrities, NHL alumni and a multitude of activities for the whole family to enjoy. Each Sunday concludes with an outdoor viewing party of an NHL game broadcast nationally on Sportsnet and hosted by Ron MacLean and Tara Slone.

“From having the honour of being on RMC campus over Remembrance Day weekend to shining a light on the recovery efforts in Williams Lake come January, Rogers Hometown Hockey connects Canadians all across the country,” MacLean said in a press release. “Every Sunday, we pull out the hockey roadmap and discover a part of Canada and ourselves.”

This year’s tour will begin in Niagra Falls, Ont. and continue across the country before concluding in Montreal.

The city is a rising hotbed of homegrown talent, producing players like Ty Rattie (Portland Winterhawks, 2009 to 13) and former Carolina Hurricanes first round pick Zach Boychuck (Lethbridge Hurricanes, 2005 to 09) and current Kootenay ICE forward Barrett Sheen all come from one of the fastest-growing cities.

Kamloops, home of the Blazers,  will be the fourth WHL stop on the tour from Jan. 13-14. The city, famed for its beautiful scenery, has produced its fair share of top-notch hockey talent.

Three-time Stanley Cup Champion and Hockey Hall of Famer Mark Recchi (New Westminster Bruins, 1985 to 86; Kamloops Blazers, 1986 to 88) is from the city, played for the Blazers and is now a co-owner of the Blazers franchise.

Lacombe, Alta. is a small commuter city located about 20 minutes north of Red Deer, home of the Rebels. The city is home to the Lacombe Generals senior hockey team and has produced a few WHL calibre players including current Swift Current Bronco Colby Sissons.

The sixth and final WHL stop on the Rogers Hometown Hockey Tour, Regina, Sask. is home to the Regina Pats, the oldest major junior hockey franchise in the world. This season marks the 100th anniversary of the Pats organization and to celebrate the Queen’s City will also play host to the 100th edition of the Mastercard Memorial Cup tournament in May.

Of course, with a history like that, the city was bound to produce a number of star-calibre hockey players, including Anaheim Ducks captain Ryan Getzlaf (Calgary Hitmen, 2001 to 05), Doug Wickenheiser (Regina Pats, 1977 to 80) and current WHLers Logan Flodell, Connor Chaulk and Arthur Miller, to name just a few.

“It’s amazing to me that we are on Season 4 of Rogers Hometown Hockey and there are still so many wonderful places in this country that we have left to discover,” said Slone. “We have been welcomed so graciously by Canadians from coast to coast and I’m looking forward to feeling that warmth, hospitality and excitement from this year’s group of hometowns.”

Here’s the full schedule of all 24 cities on the 2017-18 Rogers Hometown Hockey Tour: