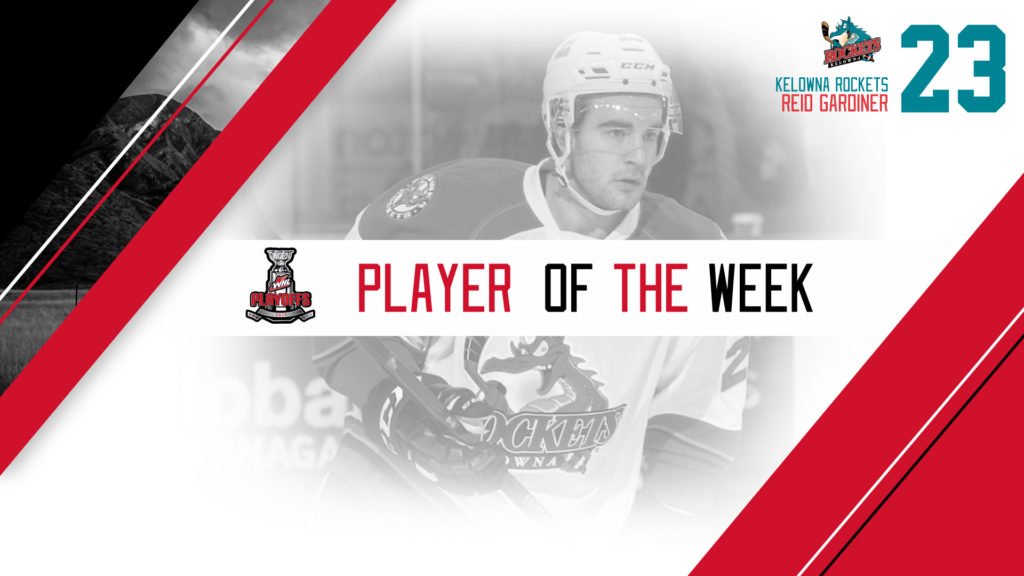 Calgary, Alta. – The Western Hockey League announced today that Kelowna Rockets forward Reid Gardiner has been named the WHL Player of the Week for the week ending April 16, 2017.

Gardiner exploded for 12 points (6G-6A) in three games, helping the Rockets advance to the Western Conference Championship series for the fourth consecutive year following a five-game victory over the Portland Winterhawks.

On Tuesday, April 11, Gardiner provided two assists in a 4-2 loss at Portland to start his big week. On Wednesday, April 12, he stepped it up a notch by scoring two power-play goals, one of which was the game-winner, and adding another two assists in a 7-2 win at Portland, earning first-star recognition. If four points wasn’t impressive enough, Gardiner registered four goals – including three on the man advantage, the game-winning goal and an insurance tally – along with two assists on Friday, April 14 in a 6-2 win versus Portland as the Rockets clinched their second-round series in five games and advanced to the Western Conference Championship series.

Gardiner, who was acquired by the Rockets from the Prince Albert Raiders prior to the WHL Trade Deadline, currently leads the WHL Playoffs in scoring with 22 points (12G-10A) in 11 games.

The 21-year-old product of Humboldt, Sask., finished the WHL regular season with 37 points (18G-19A) in 28 games after returning from the American Hockey League’s Wilkes-Barre/Scranton Penguins where he started the campaign.

He was originally a first-round pick (eighth overall) of the Raiders at the 2011 WHL Bantam Draft.

Gardiner and the Rockets take on the Seattle Thunderbirds in the Western Conference Championship series, which begins this Friday, April 21 (7:35 p.m. PT) at the ShoWare Center in Kent, Wash.