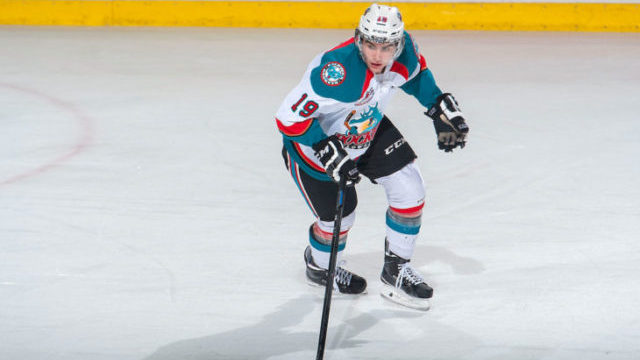 The southern Alberta native also played on Team Canada at the IIHF World Junior Championship this year. In seven games he produced three assists, four penalty minutes, and a plus-6 rating. He and his Canadian mates took home a silver medal from the tournament.

Dube has improved his points per game in each of his three seasons with Kelowna. In his rookie campaign he played in 45 games collected 17 goals and 10 assists for 27 points. Last season he played 65 games, scored 26 goals, and added 40 assists for 66 points. Dube missed just under half of this season due to injury, but since coming back he has collected 20 goals and 35 assists for 55 points in 40 games played and he’s added a +18 rating.

You can catch Dube and his Rockets squad tonight when they kick off game one of round one of the 2017 WHL Playoffs versus the neighbouring Kamloops Blazers.

Kelowna and Kamloops play Game 2 on Saturday night at Prospera Place before heading to Kamloops for Games 3 and 4 on Tuesday and Wednesday, respectively.

Tickets are available for Rockets home games through selectyourtickets.com, at the Prospera Place box office or by phone at 250-762-5050.