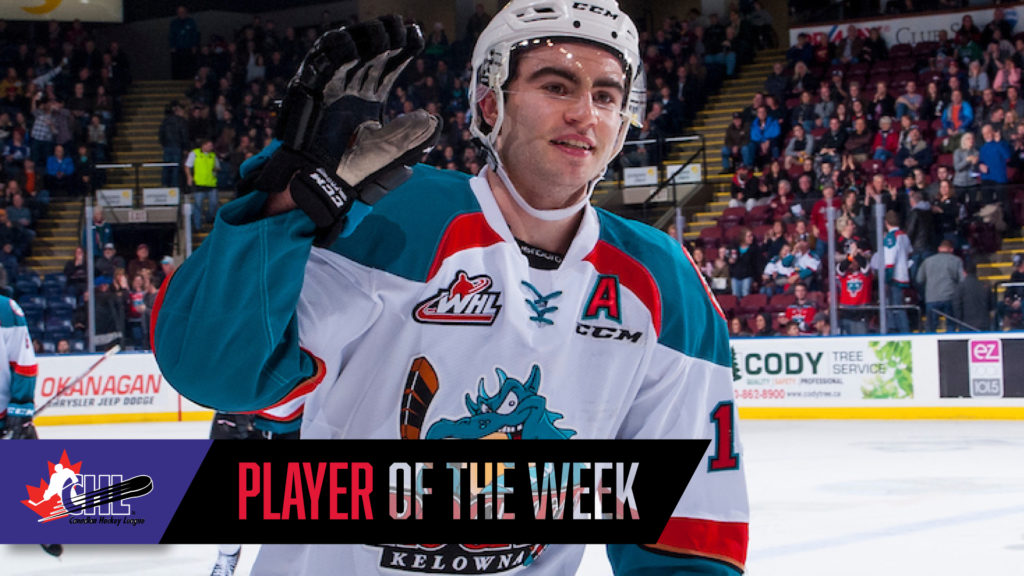 Toronto, ON – The Canadian Hockey League today announced that Calgary Flames prospect Dillon Dube of the Kelowna Rockets is the CHL Player of the Week for the final week of regular season action ending March 18 scoring four goals and three assists for seven points in two games with a plus-minus rating of plus-5.

Dube extended his personal point-streak to eight with a pair of multi-point performances last week that helped the Rockets clinch their seventh B.C. Division title in franchise history with a record of 43-22-5-2. On Wednesday night, Dube scored twice including the game-winner while adding an assist as part of a 6-3 win over the Prince George Cougars. He wrapped up the season with a first-star effort tallying two goals and two assists in an 8-1 victory over the Vancouver Giants.

A 19-year-old, 5-foot-11, 186-pound forward from Cochrane, Alta., Dube finishes his fourth season with the Rockets producing a career-high 84 points in 53 games including 38 goals and 46 assists. He joined the organization as a first round pick in the 2013 WHL Bantam Draft and played 203 career games accumulating 232 points.  The captain of Canada’s gold medal winning team at the 2018 IIHF World Junior Championship was a second round pick by the Flames in the 2016 NHL Draft.

Also considered for the award this week was Vegas Golden Knights prospect Nick Suzuki who reached the century mark in points with six goals and one assist for seven points in his final three games of the season helping the Owen Sound Attack clinch fourth place in the OHL’s Western Conference standings, and defenceman Nicolas Beaudin who contributed seven assists in three games for the Drummondville Voltigeurs who finish the season fifth place in the QMJHL’s overall standings.

After capturing the B.C. Division for the seventh time in franchise history, Dube and the Rockets will begin their journey in the 2018 WHL Playoffs at home Thursday, March 22 (7:05 p.m. PDT) against the Tri-City Americans.