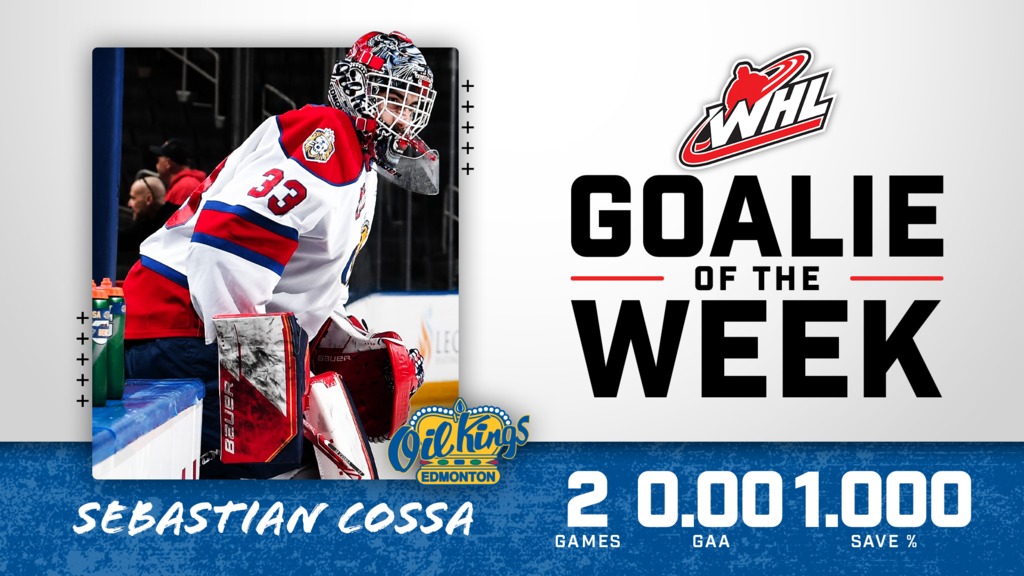 Calgary, Alta. – The Western Hockey League announced today that Edmonton Oil Kings goaltender Sebastian Cossa has been named WHL Goaltender of the Week for the week ending May 8, 2022.

The Detroit Red Wings prospect, who is also the reigning WHL Goaltender of the Month, stopped all 44 shots he faced this past week, posting a 2-0-0-0 record, a 0.00 goals-against average, 1.000 save percentage and two shutouts as his Oil Kings earned a 2-0 advantage in their best-of-seven series with the Red Deer Rebels.

The product of Fort McMurray, Alta. parried aside all 18 shots he saw in Game 1 Thursday, May 5, helping Edmonton register a 4-0 victory.

Cossa was named Second Star in Saturday’s triumph, which marked his third shutout in six appearances during the 2022 WHL Playoffs.

The 6-foot-6, 215-pound netminder was the first goaltender selected in the 2021 NHL Draft, going 15th overall to the Detroit Red Wings. Cossa signed an entry-level contract with Detroit in August of 2021.

Cossa and the Edmonton Oil Kings continue their Second Round series with the Red Deer Rebels by hitting the road for two contests. The best-of-seven series continues with Game 3, scheduled for Monday, May 9 (7:00 p.m. MT, Peavey Mart Centrium).

Regarded as the world’s finest development league for junior hockey players, the Western Hockey League (WHL) head office is based in Calgary, Alberta. The WHL consists of 22 member Clubs with 17 located in Western Canada and five in the U.S. Pacific Northwest. A member of the Canadian Hockey League, the WHL has been a leading supplier of talent for the National Hockey League for over 50 years. The WHL is also the leading provider of hockey scholarships with over 375 graduates each year receiving WHL Scholarships to pursue a post-secondary education of their choice. Each season, WHL players also form the nucleus of Canada’s National Junior Hockey Team.