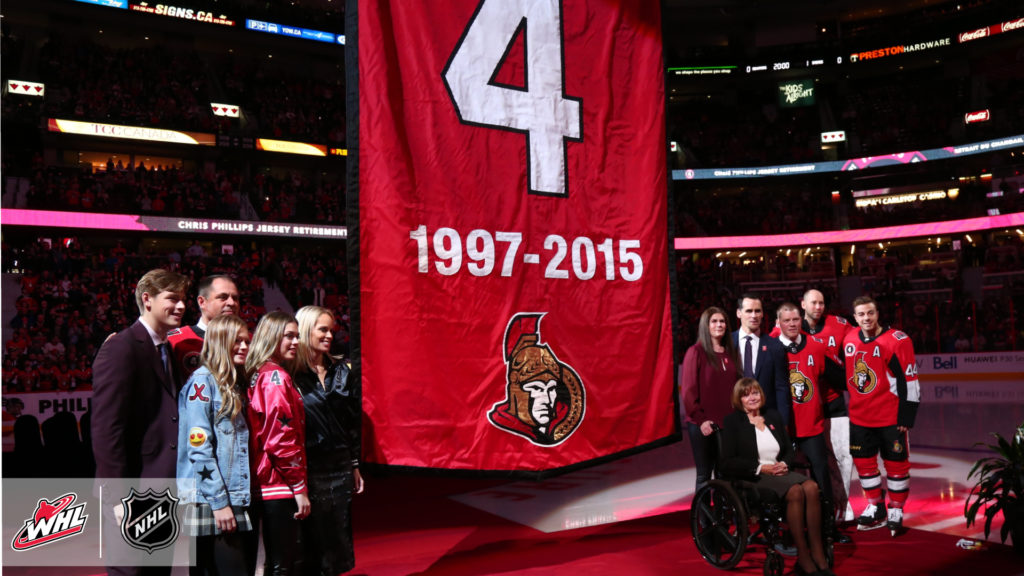 On Tuesday February 18, Western Hockey League Alumni Chris Phillips had his jersey retired by the Ottawa Senators prior to the Senators game against the Buffalo Sabres. Phillips, prior to being drafted by Ottawa, spent two seasons in the WHL with the Lethbridge Hurricanes and Prince Albert Raiders.

Phillips was quick to leave his mark on the league after he put up 40 points (10G-30A) in 61 WHL regular season games in his first season. The product of Fort McMurray, Alta. picked up the Jim Piggott Memorial Trophy as WHL Rookie of the Year and was named to the CHL All-Rookie Team.

The defenceman’s numbers continued to improve the following season, registering 48 points (7G-41A) in 58 games split between the Raiders and Hurricanes. Phillips played a pivotal role for the Hurricanes in the 1997 WHL Playoffs, notching 25 points (4G-21A) en route to the Club’s WHL Championship win. That season, Phillips was awarded the Bill Hunter Memorial Trophy as the WHL’s Top Defenceman. At the 1997 Memorial Cup, Phillips tallied five points (2G-3A) in five contests and was named to the Memorial Cup All-Star team.

Phillips was picked with the first-overall selection of the 1996 NHL Draft. He would go on to spend his entire NHL career with the Senators, suiting up in 1,179  games while tallying 288 points (71G-217A). Phillips finished his career as the Senators all-time leader in games played (1,179), ranks 12th all-time for the Senators in points (288), seventh in assists (217A) and sixth all-time in plus-minus rating (+68).

During the ceremony, various points in Phillips career where highlighted including his first goal, assist and other milestone moments.

Sending in his congratulatory words prior to the game was former Senator and WHL Alumni, Zdeno Chara. The former Prince George Cougar recently competed in his 1,500th game in the NHL last week with the Boston Bruins. The defenceman spent four seasons with the Senators from 2002 until 2006.

Big Z with some big congrats for former teammate @CPhillipsFour before we send #4 to the rafters tonight. #4EverASen

Also in attendance for the ceremony was Phillips former roommate and WHL Alumni, Curtis Lazar. The forward started his career with the Senators and lived in Phillips’ basement while with the team. Lazar is in his first season with Buffalo. The product of Salmon Arm, B.C. spent four seasons in the WHL with the Edmonton Oil Kings, playing a key role in two WHL Championship wins and a Memorial Cup win in 2014.

Former teammate and tenant @CurtisLazar95 with some love for @CPhillipsFour before tomorrow's jersey retirement ceremony. #4EverASen

One of the speakers for the evening was WHL Alumni Wade Redden who spent most of his career as Phillips’ defensive partner. Redden spent his WHL career with the Brandon Wheat Kings.

Find the full jersey retirement below