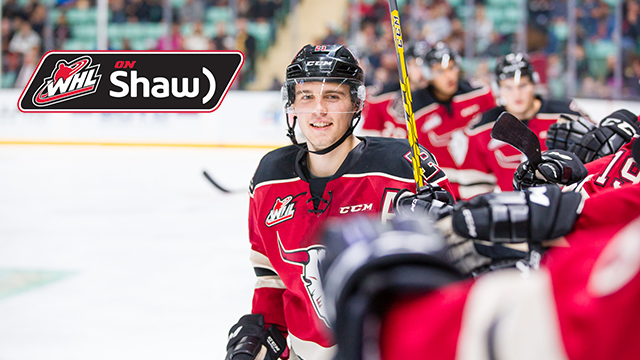 With the WHL Trade Deadline in the rearview mirror, the Red Deer Rebels play host to the Prince George Cougars on the WHL on Shaw Tuesday night.

For the Rebels, they forge on without the services of defenceman Josh Mahura and forward Jeff de Wit, after both were dealt to the Regina Pats in a deadline day blockbuster.

Having gone 7-3-0-0 over their previous 10 outings, the Cougars will look to continue rolling as they pursue a B.C. Division title. With a five-point edge on the Kamloops Blazers, ever last point counts down the stretch run in the second half of the WHL season.

Meanwhile, the host Rebels hold down third place in the Central Division, only two points ahead of the Edmonton Oil Kings to the north.

Tuesday marks the first of three meetings this season between the Cougars and Rebels.

The Prince George pack is led by the newest member, Popugaev, who has collected 53 points (23G-30A) in 42 games, including two points in his lone game as a Cougar. Highlighted by NHL Central Scouting as a Player to Watch ahead of the 2017 NHL Draft, the Moscow product brings his 6-foot-5, 202-pound frame to a Cougars club that means business.

Prior to the addition of Popugaev, Winnipeg Jets’ prospect Jansen Harkins was the team’s top scorer with 40 points (10G-30A) through 35 games.

The Rebels counter with Czech centre Michael Spacek, another Jets’ prospect, who has notched 42 points (16G-26A) in 31 games.

Between the pipes, 20-year-old Ty Edmonds is expected to get the nod for Prince George. He carries a record of 22-7-1-0 with a 2.16 goals-against average, .921 save percentage and one shutout.

At the other end Lasse Petersen is set to go in the blue paint for the Rebels. Fresh off an appearance with Denmark at the 2017 IIHF World Junior Championship, Petersen is 9-6-3-0 with a 3.21 GAA and .894 SV%.

Following Tuesday’s date in Red Deer, the Cougars and Rebels will meet on two further occasions before the season comes to a close. Prince George returns to Red Deer on Jan. 27 before the Rebels visit the Cougars and the CN Centre on Feb. 21.