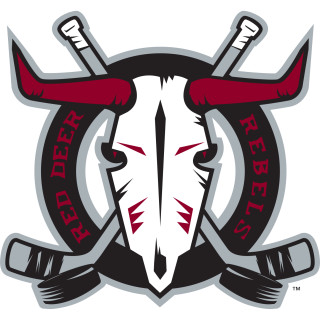 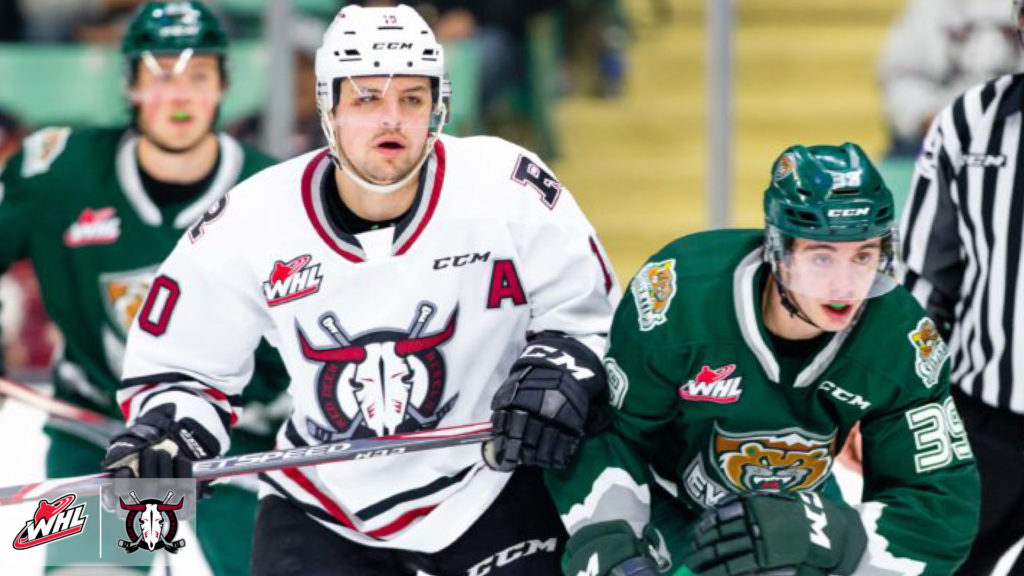 “Playing 300 games in this league with all these players . . . you’re grateful for it. I never thought I’d play 300 games in any league,” the Red Deer Rebels 20-year-old forward said Tuesday.

“Looking back on my career now, it’s weird. You get to play with all these guys, you get to play for multiple teams like I have . . . 300 games is not easy, especially nowadays.

“I look back on it and I do the math and I’ve played something like 94 per cent of the games I could have played.”

The 5-foot-10, 191-pound winger — who reached the 300-game milestone Saturday at the Centrium and then surpassed it the next day in Calgary —  can give himself some credit for his ability to remain relatively healthy over his WHL career, which started in 2015 with the Saskatoon Blades.

“I was so lucky to be able to be stay healthy and not battle some of the injuries these guys have. I’m so grateful for that,” he said.

Hausinger’s longevity is somewhat difficult to perceive considering he plays all out — seemingly with a chip on his shoulder — and is never one to shy away from the corners.

“You have to eat right, you have to manage your time right inside and outside the rink,” he said. “Over time I’ve learned these things from a lot of older guys.”

One such mentor is former Rebels captain Adam Musil.

“He taught me do those things, to treat your body right. It’s going to help you especially later in the season when your body is hurting, when you’ve played a lot of games and you just need some rest.

“I thank him for that. I thank him every day for teaching me so much.”

Now that he’s a relative long-time WHL veteran, Hausinger is willing to pass on his knowledge to his younger teammates and show them — by example — the importance of maintaining a solid work ethic.

“This is a very competitive league and you still have to battle to be in the lineup every night,” he said. “What I tell the young guys is don’t take a day off. I was 18 and getting healthy scratched in Kootenay, on a very average team.

“Here, with the future that this team has . . . they’re going to have so many good players. You’ll have to compete every day in practice and then in the games. And you have to be a good guy off the ice.

“I try and teach the young guys those things because that’s one thing I take pride in — coming to the rink ready to work every day. You never know when your last game, your last shift, is going to be.”

A product of Anchorage, Alaska, Hausinger played bantam hockey in Los Angeles and with the Skipjacks U16 team in York, Pa., before joining the Blades.

He was dealt to the Rebels in November of 2016 and played 41 games in Red Deer that season. 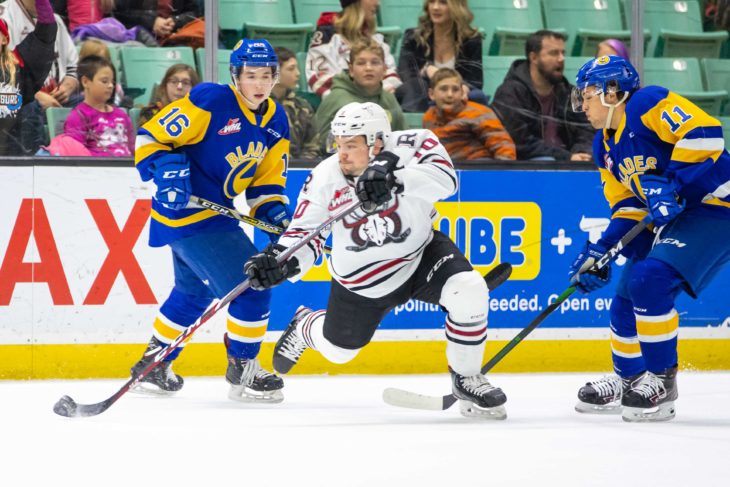 Hausinger was then traded to the Kootenay Ice in June of 2017 and, with Brett Davis as his line mate, collecting 43 points (21G-22A) that season. Hausinger returned to the Rebels in November of 2018 in a trade that also brought Davis — who, in turn was dealt to the Lethbridge Hurricanes earlier this month — to Red Deer.

“I built a lot of chemistry with Brett who I played with a long time,” said Hausinger, who last season was nearly a point per game player in 40 contests with Red Deer, tallying 37 points (13G-24A).

“Me and him stuck it out together in Kootenay and got traded here. As much as our success didn’t carry over to this season I give him credit for my individual success.”

While he didn’t reach the 20-goal mark until his third season in the league, Hausinger always believed that he could be an offensive contributor at the major junior level.

“I always knew I could be that type of player. That’s the kind of player I was in bantam,” he said.

“Confidence is huge when you’re playing in this league. It was nice to be able to put up a year like that when I was 18 and then come here and try and help out last year. I wish things could have been different in playoffs (the Rebels were swept by the eventual league champion Prince Albert Raiders in the first round last spring).

“But I was so grateful to play with Hags (Brandon Hagel) last year, just a tremendous player, and Johny (then captain Reese Johnson) as well, and just to be coached by the best again . . . it’s always something I’ll be grateful for.”

Hausinger, who this winter has +recorded 28 points (9G-19A) in 45 games as an alternate team captain, is unsure of his future beyond this season.

He has accrued five years of tuition and books if he decides to go the university route, but also isn’t ruling out playing pro next season.

“I’m really excited for the future, but for now I’m just concentrating on these last 23 games, just doing whatever I can to pile up some wins for this team and help these young guys to get their games to higher levels,” he said.

“I’m super excited for the future here, even though I’m not going to be a part of it.”

One potential benefit of playing pro would be to skate alongside his older bother Kenneth, who is just completing his senior year with NCAA Division 1 University of Massachusetts-Lowell.

“It’s always been a dream of mine to play with my brother,” said Hausinger. “He’s keeping his options open as well.

“Hopefully I can team up with him and play some games with him somewhere. It would fulfil a lifelong dream to be able to skate around with my brother, zipping passes at each other.”