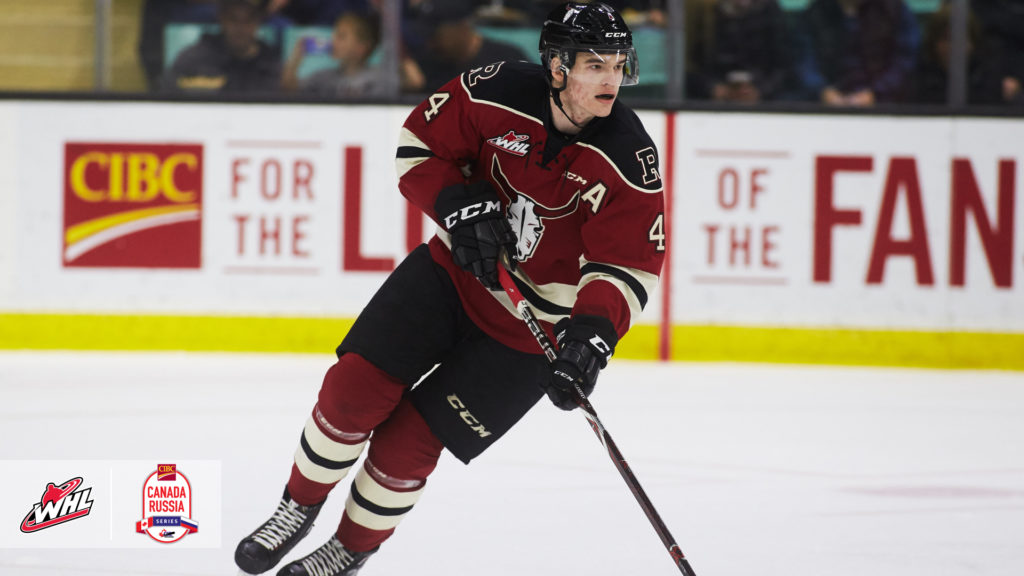 Toronto, Ont. – The Canadian Hockey League in association with the Russian Ice Hockey Federation today announced the roster for Team Russia that will compete in the 2018 CIBC Canada Russia Series which takes place November 5-15.

A team of 23 Russian players including two goaltenders, nine defencemen, and 12 forwards will travel across Canada as part of the 16th annual series playing six games against CHL competition in preparation for the 2019 IIHF World Junior Championship taking place this season in Vancouver and Victoria, British Columbia.

Russia’s roster is headlined by Western Hockey League defenceman Alexander Alexeyev of the Red Deer Rebels who was chosen in the first round, 31st overall, of the 2018 National Hockey League Draft by the Washington Capitals. On September 24, 2018, Alexeyev signed a three-year, entry-level contract with the Capitals.

He’ll play in both games against Team WHL beginning November 5 in Kamloops followed by Game Two on November 6 in Vancouver.

Alexeyev has played an integral role in the Rebels’ early success this season, which has them placed first in the Central Division and second in the Eastern Conference. The 6-foot-3, 200-pound product of St. Petersburg, Russia was originally selected by the Rebels in the first round, 49th overall, of the 2016 CHL Import Draft.

The left-shot defenceman is presently second in scoring among WHL defencemen this season with 20 points (7G-13A) in 15 games, including two power-play goals and two game-winning goals. Alexeyev is also second in scoring on the Rebels.

He was named the WHL On the Run Player of the Week for the week ending October 28, 2018, recording eight points (3G-5A) in four games. In 101 WHL regular season games with the Rebels, Alexeyev has 78 points (18G-60A), including five power-play goals and three game-winning goals. Alexeyev has also appeared in three WHL playoff games, recording five points (2G-3A), including one power-play goal.

Anderson-Dolan Unable to Compete for Team WHL
Due to an upper-body injury, Spokane Chiefs forward Jaret Anderson-Dolan will unfortunately be unable to compete on behalf of Team WHL at the 2018 CIBC Canada Russia Series. His position on Team WHL’s roster will not be replaced.

Behind the bench for Team Russia is head coach Valery Bragin who is making his seventh series appearance and fifth straight.  His time with the Russian National Junior Team has led to five World Junior medals including 2011 gold in Buffalo, silver in Calgary (2012), Toronto (2015), and Finland (2016), along with bronze in Montreal (2017).

For event information including how to purchase tickets please visit http://chlcanadarussia.ca.