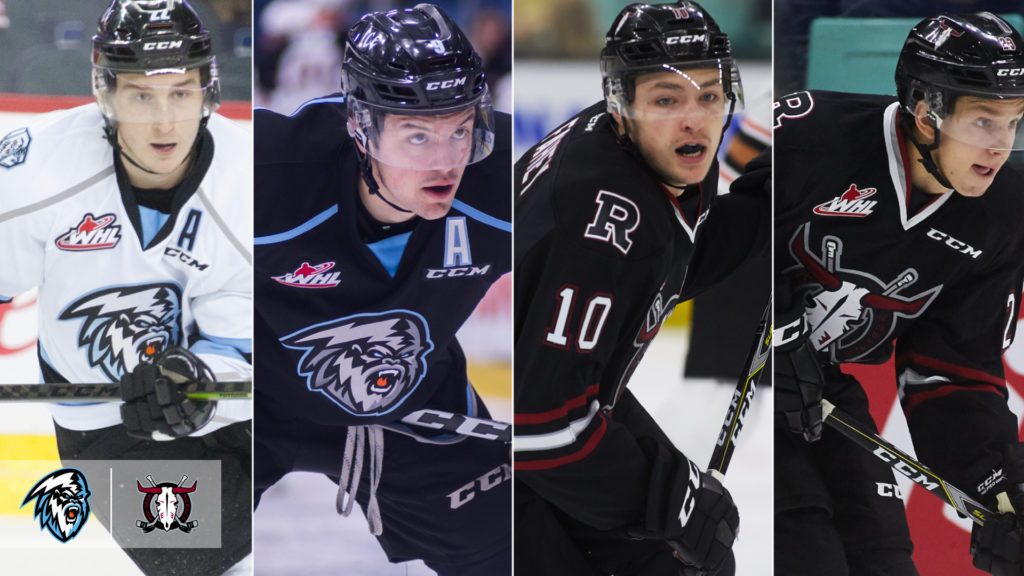 The competition level in the Central Division was kicked into high gear Thursday with the Lethbridge Hurricanes acquiring Nick Henry and Jake Leschyshyn from the Regina Pats.

Friday afternoon, the Red Deer Rebels kicked it into overdrive.

As part of an 11-asset trade, the Rebels acquired a pair of forwards from the Kootenay ICE in Dallas Stars prospect Brett Davis and 19-year-old forward Cameron Hausinger.

“We are excited to welcome Chase, Justin, River and Austin to our organization,” said Matt Cockell, President and General Manager of the ICE. “Cam and Brett have been great players for the ICE and ambassadors in the community, we wish them well in Red Deer.”

Davis and Hausinger are significant adds up front for the Rebels, who lead the Central Division by a single point over the Edmonton Oil Kings.

A 6-foot-1, 191-pound product of Oakbank, Man., Davis was selected by the Stars in the sixth round, 163rd overall, at the 2017 NHL Draft. In 24 games this season, Davis had 19 points (7G-12A), including six power-play goals, placing him second in team scoring. Originally selected in the fourth round, 78th overall, by the Hurricanes in the 2014 WHL Bantam Draft, Davis will join his third Central Division team.

Over the course of a 211-game WHL career with the Hurricanes and ICE, Davis has posted 120 points (55G-65A), including 20 power-play goals, four short-handed goals, and five game-winning goals. Last season, Davis set career-highs with the ICE, posting 58 points (25G-33A) in all 72 games.

Also headed to the Rebels in the deal is Hausinger, a 5-foot-10, 187-pound product of Anchorage, Alaska. Through 27 games this season, Hausinger had 17 points (8G-9A), including five power-play goals, tying him for third in team scoring. Hausing was originally selected by the Saskatoon Blades in the seventh round, 135th overall, of the 2014 WHL Bantam Draft.

In addition to the five draft picks the Rebels acquired, they also added four players to the deal, with Schellenberg and Fahey leading the quartet.

A 6-foot-0, 160-pound product of Grande Prairie, Alta. Schellenberg has tallied six points (1G-5A) in 19 games this season and has appeared in 67 WHL regular season games, all with the Rebels. Over that time, he’s posted nine points (3G-6A), including one game-winning goal.

Fahey is also part of the package headed to the ICE. The 6-foot-2, 195-pound forward from Campbell River, B.C. was originally selected by the Rebels in the fourth round, 74th overall, of the 2016 WHL Bantam Draft. Since then, he’s appeared in 47 WHL regular season games for the Rebels, posting four points (1G-3A).

Svenson is also a young piece in the deal as the 5-foot-11, 197-pound product of Ile Des Chenes, Man. joins his second WHL team. Selected by the Rebels in the third round, 48th overall, of the 2016 WHL Bantam Draft, Svenson has appeared in 19 games with the Rebels, being held pointless. Svenson has also appeared in 15 games with the Swan Valley Stampeders of the Manitoba Junior Hockey League this season, recording 11 points (6G-5A).

Also included in the deal is Bertholet, an unsigned 15-year-old from Thompson, Man. The forward was originally selected by the Rebels in the fifth round, 94th overall, of the 2018 WHL Bantam Draft. Playing with the Prince Albert Mintos of the Saskatchewan Midget AAA Hockey League, Bertholet has 16 points (5G-11A) in 21 games. In 36 games with the Norman Bantam AAA Wolves last season, he posted 68 points (30G-38A).

The Rebels play host to the Calgary Hitmen Friday, November 30 (7:00 p.m. MT) at the Enmax Centrium, beginning a string of home play that’ll see them play eight of their next nine games in central Alberta. The ICE begin a three-game road trip through the U.S. Division Friday, November 30 (7:35 p.m. PT) against the Seattle Thunderbirds.