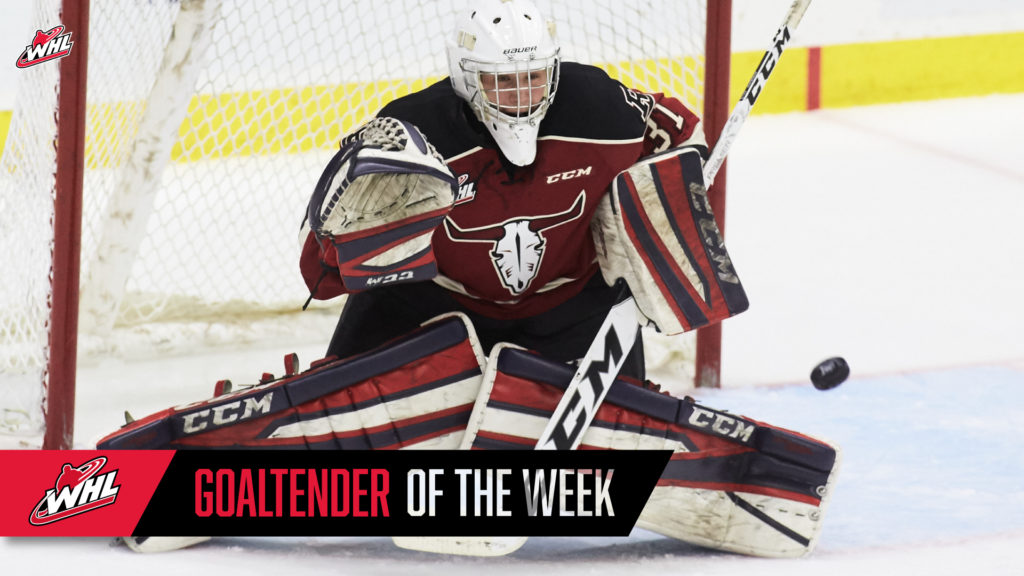 Anders, a 6-foot-0, 186-pound 17-year-old product of Regina, Sask., helped the Rebels take five of a possible six points from their three games this week as they looked to improve their record. In three games, Anders went 2-0-1-0, sported a 1.62 goals-against-average and stopped 119 of 124 shots for a .960 save-percentage.

His strong week began Wednesday against the Medicine Hat Tigers when he stopped 36 of 37 shots in a 4-1 win for the Rebels. With the game tied 1-1 after 20 minutes, Anders stopped all 25 shots from the Central Division leaders in the second and third period to help secure a Red Deer victory on home ice. In addition to being named the third star of the game, Anders was named the WHL’s second star of the night.

Saturday, Anders’ strong week continued in a 3-2 overtime victory over the Kelowna Rockets as he stopped 41 of 43 shots against the B.C. Division leaders. After stopping all 15 shots in the first, he still 26 of Kelowna’s 28 shots over the final 42:46 of the game. He was recognized once again Saturday, earning first star honours in the game.

Sunday saw Anders deliver another stellar performance, stopping 42 of 44 shots in a 2-1 overtime loss to the Lethbridge Hurricanes. Stopping all 30 Lethbridge shots through the first 40 minutes, Anders earned first star of the game honours for his performance. In 185:43 of action this week, Anders effort ensured the Rebels trailed for only 12:03 of that time.

Having taken points from three straight games, Anders and the Rebels will look to continue their success as they begin a four-game road trip Tuesday, January 30 (7:00 p.m. CST) against the Prince Albert Raiders.