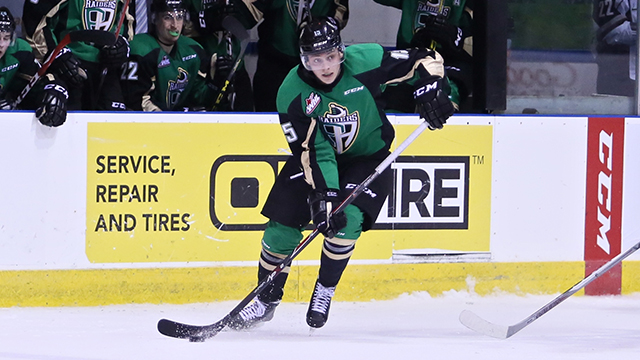 The Rebels were left with a vacant overage slot after the release of goaltender Trevor Martin earlier this year. Glover joins forward Evan Polei and defenceman Colton Bobyk as the Rebels’ trio of 20-year-olds.

The Rebels have acquired 20-year old F Austin Glover from the Raiders for a 3rd Rd selection 2017 and 17-year old forward D-Jay Jerome.

For the rebuilding Raiders, they move out another veteran piece while adding another budding talent.

Jerome, a 6-foot, 170-pound product of Lethbridge, has skated in 23 WHL regular season games, in this his rookie campaign in Red Deer, collecting eight points (5G-3A) to date.

With Glover’s departure opening a 20-year-old slot in Prince Albert, the Raiders added a familiar face in a subsequent move Wednesday evening.

Kolten Olynek, a 5-foot-8, 165-pound forward from Sasktoon, returns to the Raiders after being released by the Saskatoon Blades earlier this year. A veteran of 217 career WHL regular season outings, Olynek spent 49 games with the Raiders between 2015-16 and 2016-17 before being released earlier this season and joining the Blades. A former second round pick (26th) of the Lethbridge Hurricanes, Olynek has managed 61 points (25G-36A) over his WHL career, including 13 points (7G-6A)  in 31 games this season, split between Prince Albert and Saskatoon.

Olynek is expected to join the Raiders in time to suit up for tonight’s contest against the Blades.