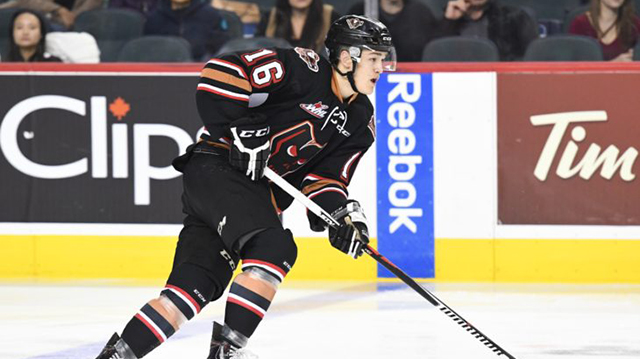 With the return of Beck Malenstyn, Jakob Stukel and Carsen Twarynski from their respective NHL clubs, the Calgary Hitmen suddenly found themselves with an abundance of forwards.

Something had to give and Thursday night, Dawson Martin was the odd man out as Mike Moore, general manager and vice-president of business operations for the Hitmen, traded the 18-year-old Winnipeg product to the Red Deer Rebels in exchange for a sixth round pick at the 2017 WHL Bantam Draft.

“We would like to thank Dawson for his time in Calgary,” Moore said in a team release. “We wish him the best in Red Deer.”

While Malenstyn, Stukel and Twarynski have returned to Calgary from their respective NHL training camps, the Hitmen still have three other regulars skating with NHL clubs.

Martin was a second round pick (40th) of the Hitmen at the 2013 WHL Bantam Draft.

The Rebels travel east to take on the Moose Jaw Warriors on Friday (7 p.m. CST) before continuing on to face the Brandon Wheat Kings on Saturday (7:30 p.m. CDT).

The Hitmen will visit the Lethbridge Hurricanes on Saturday (7 p.m. MDT).