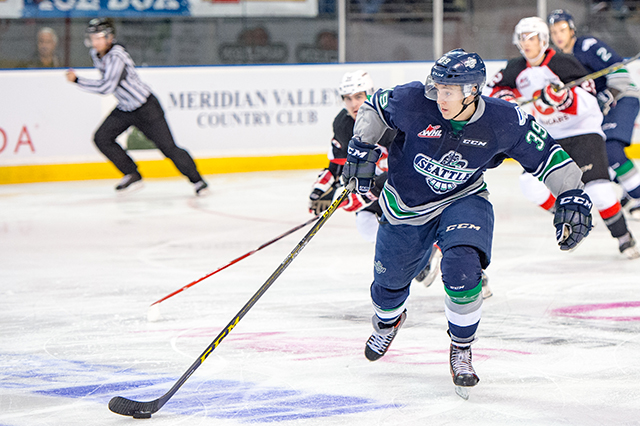 “Nic adds size and speed to our lineup, as well as valuable experience,” said Curtis Hunt, general manager of the Raiders, in a team release. “We’re excited to add him in and get him acclimated to our team.”

Holowko, a 19-year-old native of Surrey, B.C., skated in all 72 games with the Thunderbirds this past season, accruing six goals and 20 points, before adding another six points over 18 post-season contests.

Bensmiller, a 19-year-old native of Rocky Mountain House, Alta., split the 2015-16 season between the Calgary Hitmen and Raiders, registering 11 goals and 30 points over 74 games. In five playoff games with the Raiders, Bensmiller collected one assist.

“We are happy to have Layne on our team at this time,” said Russ Farwell, general manager of the Thunderbirds, in a team release. “Layne should give us a little added scoring and experience as we put together this year’s team.”

Bensmiller has played in a total of 112 WHL regular season games, tallying 17 goals and 41 points along the way.

Holowko has 135 WHL regular season games under his belt, having scored  11 goals and 29 points.

The Thunderbirds wrap up pre-season play this weekend with a home-and-home series against the Everett Silvertips, while the Raiders host the Moose Jaw Warriors Thursday night (7 p.m. MDT) before concluding exhibition action on Friday, Sept. 16 (7 p.m. MDT) in Swift Current.