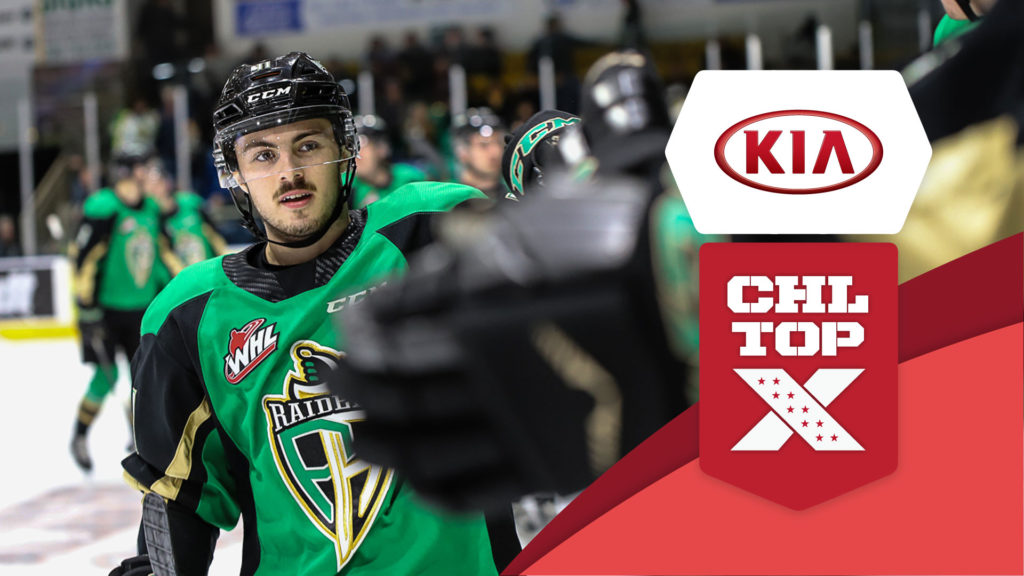 Toronto, Ont. – The Canadian Hockey League today announced the week eight edition of the Kia CHL Top-10 Rankings for the 2019-20 season. The weekly rankings of the CHL’s Top-10 teams are selected by a panel of National Hockey League scouts.

Climbing into second place this week were the Prince Albert Raiders, who hold the honour of being the Western Hockey League’s top team in this week’s rankings. The Raiders beat the Regina Pats by a 6-3 score and the Moose Jaw Warriors by a 5-1 decision before doubling up the Edmonton Oil Kings 6-3 in a battle of the league’s top two teams Tuesday. They finished off a three-game road trip with a 4-2 loss to the Calgary Hitmen Wednesday. Washington Capitals prospect Aliaksei Protas and overage forward Spencer Moe have tied for the team lead in scoring throughout the past week with nine points each. The Raiders are back in action on Friday, November 8 (7:00 p.m. CT), playing host to the Brandon Wheat Kings at the Art Hauser Centre.

Right behind them in third place are the aforementioned Oil Kings. Edmonton took a 4-3 decision against the Saskatoon Blades and a 3-2 win against the Hitmen before dropping a 6-3 result to Prince Albert. Josh Williams, who was recently added to Team WHL for the 2019 CIBC Canada Russia Series, is tied for second in team scoring with 19 points (8G-11A) through 17 games this season. The Oil Kings are back in action on Friday, November 8 (7:00 p.m. MT) against the Lethbridge Hurricanes.

Moving up into the seventh spot this week were the Everett Silvertips, who have resumed their familiar position at the top of the U.S. Division and Western Conference. After taking a 4-1 loss against the Portland Winterhawks Friday, the Silvertips responded with a 3-2 win against the Kamloops Blazers and a 4-3 overtime decision against the Spokane Chiefs to earn four of six points from a three-game weekend. Captain Bryce Kindopp resumed his role as the team’s leading goal scorer, potting three goals on the weekend. The Silvertips return to Spokane for their next game, facing the Chiefs on Friday, November 8 (7:05 p.m. PT).

Earning honourable mentions this week in the Kia CHL Top 10 Rankings were the Winterhawks and Hurricanes.

The Winterhawks rank second in the U.S. Division and Western Conference and recently had their five-game winning streak snapped. 2020 NHL Draft prospect Seth Jarvis leads the Winterhawks in November with six points (3G-3A) in three games. Portland returns to action Friday, November 8 (7:30 p.m. PT) when they begin a home-and-home series against the Vancouver Giants at the Langley Events Centre.

A 9-0-0-2 stretch in their last 11 games have the Hurricanes in a three-way tie for first place in the league standings at 27 points. Import forward Oliver Okuliar leads the WHL in scoring during the team’s undefeated-in-regulation stretch with 20 points (13G-7A), including a seven-game goal-scoring streak that was snapped Wednesday. The 19-year-old was named the WHL On the Run Player of the Week Monday. Up next for the Hurricanes is a continuation of a three-game home stand when they welcome the Oil Kings to southern Alberta on Friday, November 8 (7:00 p.m. MT).