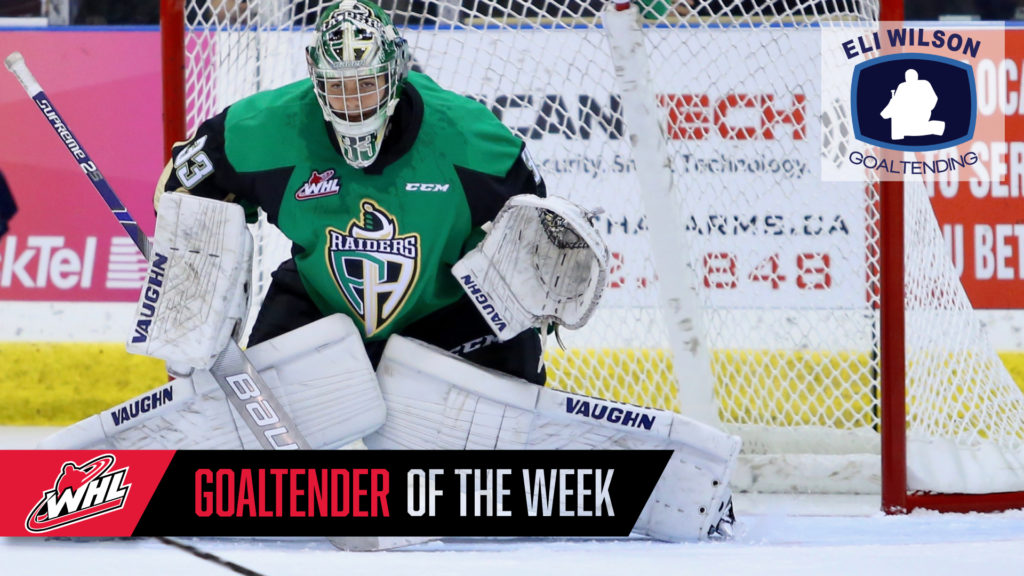 For three consecutive weeks, Scott, a prospect for the Toronto Maple Leafs, has been honoured with the WHL Eli Wilson Goaltending Goaltender of the Week award. After appearing in four games during the past week, Scott picked up one shutout win and sported a 2-2-0-0 record, 2.29 goals-against average and stopped 112 of 121 shots for a .926 save percentage.

Starting things off strong in Vancouver on Tuesday, Scott and the Raiders defeated the Giants 8-2 in Game 3 of the 2019 Rogers WHL Championship Series. On Wednesday night, Scott exceeded his prior performance, making his fifth shutout of the 2019 WHL Playoffs. Stopping 15 shots in the first period, 10 in the second and 11 in the third to earn the first star of the game and WHL Championship Player of the Game.

Scott was also recently honoured at the 2019 WHL Awards in Red Deer, Alta. winning the Del Wilson Memorial Trophy as WHL Goaltender of the Year. In his fourth season with the Raiders, Scott enjoyed a campaign of career bests. His 38 wins, 1.83 goals-against average, .932 save percentage, and eight shutouts were all personal bests for the Calgary, Alta. product. The 6-foot-3, 183-pound goaltender finished first in the WHL for shutouts while placing second in wins, GAA, and save percentage.

Ready for Game 7 of the 2019 Rogers WHL Championship Series Monday, May 13 (7 p.m. MT) at the Art Hauser Centre in Prince Albert Sask., Scott and the Raiders will be looking to complete their record-breaking season with a WHL Championship.