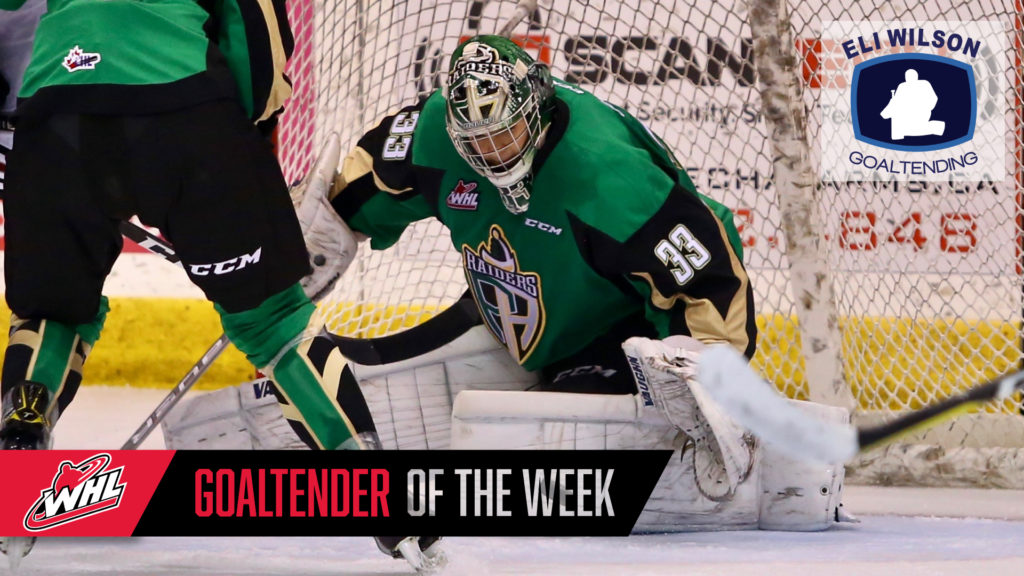 Scott, who was selected in the fourth round, 110th overall, of the 2017 NHL Draft by the Toronto Maple Leafs, maintained a 3-0-0-0 record, 1.00 goals-against-average, stopped 77 of 80 shots for a 0.963 save percentage, and recorded his first shutout of the season, as the Raiders occupied top spot in the Eastern Conference and the entire league.

In his hometown last Monday against the Calgary Hitmen, Scott stopped all 23 shots sent his way for his first shutout of the season and the fourth of his WHL career. He earned third star of game honours and second star of the night honours in the WHL.

Playing host to the Red Deer Rebels Saturday, Scott stopped 28 of 29 shots in a 2-1 victory. After allowing one goal on 11 shots in the first period, Scott shut the door the rest of the way with 18 saves in the second and third periods combined. Scott’s winning ways continued Sunday afternoon with a 26-save performance on the road against the Saskatoon Blades.

Overall, opponents went two-for-12 on the power play against Scott and the Raiders this past week, with both power-play goals coming Sunday afternoon in Saskatoon. This week marks the second time Scott has been named the WHL Eli Wilson Goaltending Goaltender of the Week, having earned the award for the week ending September 30.

The Raiders are back in action Tuesday, October 16 (7:00 p.m. MT) when the Hitmen pay a visit to the Art Hauser Centre.