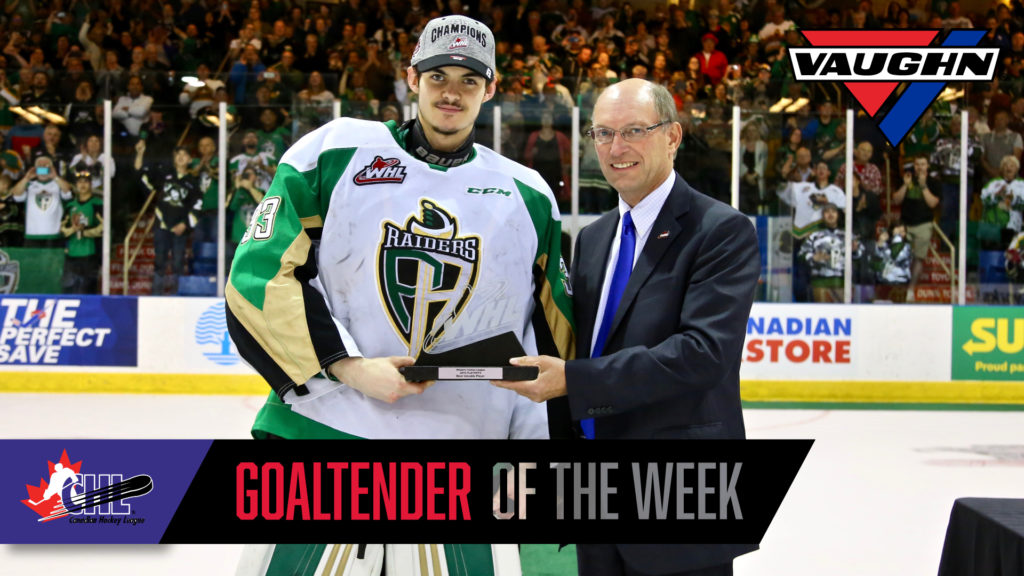 Toronto, Ont. – The Canadian Hockey League today announced that Ian Scott of the Prince Albert Raiders is the Vaughn CHL Goaltender of the Week for the final week of playoff action ending May 12 with a 2-2 record, a goals-against average of 2.29, save percentage of .926, and one shutout.

The Toronto Maples Leafs Scott claims the honour for the first time this postseason after stopping 112 shots over four games versus the Vancouver Giants in the 2019 Rogers WHL Championship Series. Scott started the week with 27 saves in an 8-2 victory in Game 3, then posted an impressive 36-save shutout versus the Giants en route to a 1-0 victory in Game 4 that earned him first-star honours. He then followed up that performance with another 26 stops in a close fought 4-3 loss in Game 5 before turning aside 23 shots in a 4-2 defeat in Game 6.

However, Scott found the win column in Game 7, coming up with 24 saves in a 3-2 overtime win to help guide the Raiders to the WHL league championship for the first time since 1985. Prince Albert now advances to the 2019 Memorial Cup presented by Kia, with the team’s first round-robin game coming Friday versus the Halifax Mooseheads.

A 6-foot-3, 183-pound native of Calgary, Alta., Scott finishes the postseason with a 16-7 record, five shutouts, a 1.96 goals-against average, and .925 save percentage. For his efforts, Scott was recognized as the 2019 WHL Playoffs MVP. Across four seasons with the Raiders, the Toronto Maple Leafs draft pick owns an 87-64-9-5 showing in 175 appearances, alongside a 2.90 goals-against average, a .905 save percentage and 11 shutouts.

Also considered for the award this week was Samuel Harvey of the Rouyn-Noranda Huskies, who went 3-1 in four appearances versus the Halifax Mooseheads in the QMJHL’s President’s Cup Final, posting one shutout, a 2.50 goals-against average, and .916 save percentage. In the OHL, Guelph Storm netminder Anthony Popovich came up with 99 saves over four consecutive games against the Ottawa 67’s in the OHL’s J. Ross Robertson Cup Final as he posted a 3.00 goals-against average and .892 save percentage.