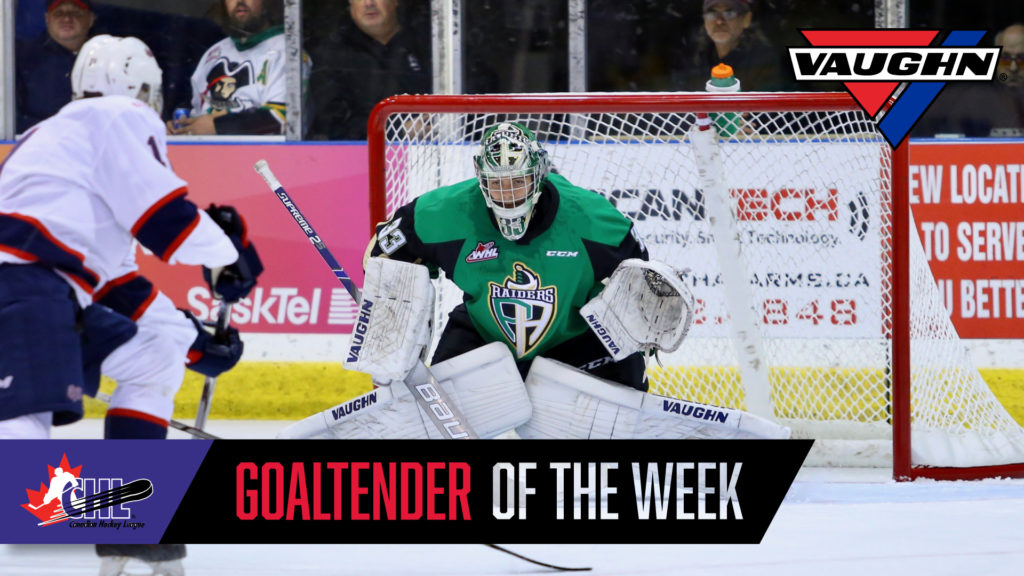 Toronto, Ont. – The Canadian Hockey League today announced that Ian Scott of the Western Hockey League’s Prince Albert Raiders is the Vaughn CHL Goaltender of the Week for the regular season week ending March 10 with a 3-0-0-0 record, three shutouts, a goals-against average of 0.00, and save percentage of 1.000.

Scott claims the honour for the second time this season after putting together three perfect games last week in which he stopped a combined 52 shots to help the Raiders improve to 53-9-2-2 and clinch the Scotty Munro Memorial Trophy, presented to the WHL’s regular season champion. His top performance came Tuesday when he made 24 saves in a 6-0 win over the Swift Current Broncos. The Toronto Maple Leafs prospect then followed that up with consecutive 14-saving outings in two more games against Swift Current. Scott now has eight shutouts in the season, surpassing the Everett Silvertips’ Dustin Wolf for the most in the entire CHL.

Scott, the 6-foot-3, 183-pound netminder, is competing in his fourth season with the Raiders, where this year he has already notched career highs in wins and shutouts. Through 47 games, the Calgary, Alta., native has posted a 37-7-1-2 record alongside a 1.82 goals-against average and .932 save percentage.

Also considered for the award this week was Jonathan Lemieux of the Val-d’Or Foreurs after he posted a 1-0-0-1 record in two appearances, including back-to-back first-star honours against the Charlottetown Islanders and Rimouski Oceanic, to go with a goals-against average of 1.44 and save percentage of .963. In the OHL, Buffalo Sabres prospect and Sudbury Wolves netminder Ukko-Pekka Luukkonen went 2-1-0-0, while making 91 saves over three games, a stretch which saw him notch the Wolves’ franchise record for shutouts in a season with six, alongside a goals-against average of 1.01 and save percentage of .968.