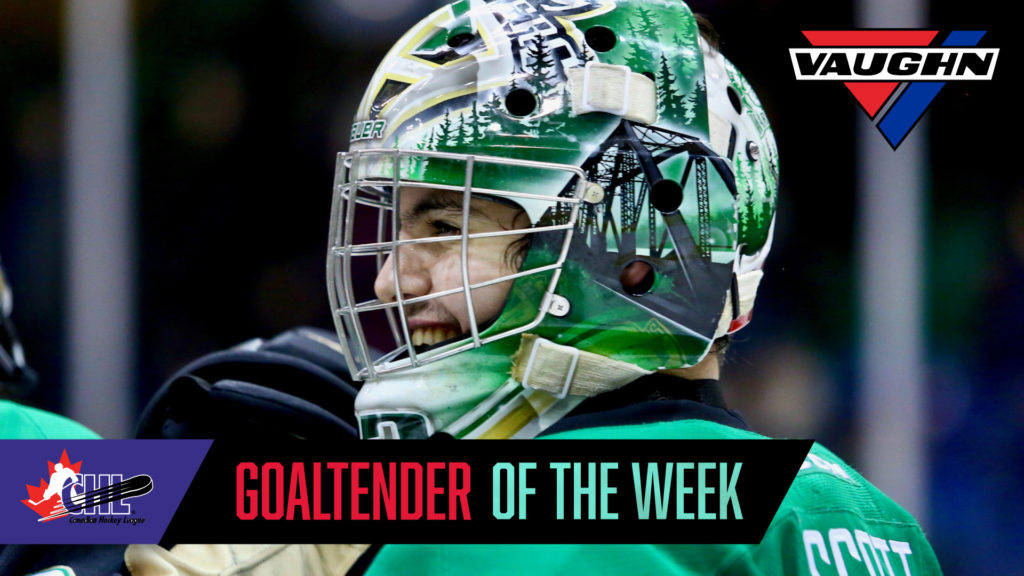 Toronto, Ont. – The Canadian Hockey League today announced that Toronto Maple Leafs prospect Ian Scott of the Western Hockey League’s Prince Albert Raiders is the Vaughn CHL Goaltender of the Week for the regular season week ending November 18 posting a 3-0-0-0 record with two shutout victories for a goals-against-average of 0.33 and save percentage of .989.

Scott turned aside 92 shots in a trio of wins to extend the Raiders impressive streak to 13 continuing their dominance atop the national rankings with a 20-1-0-0 record. Last Wednesday, he stopped a season-high 43 shots, earning first star honours in a 2-0 shutout victory against the Medicine Hat Tigers, then stopped 23 of 24 on Friday as first star of a 3-1 win against the Tri-City Americans. That game was extra special for Scott, who scored an empty-net goal becoming the first WHL netminder since Stuart Skinner in March, 2016, to find the back of the net. Scott’s week wrapped up Saturday with a 26-save performance to blank the Brandon Wheat Kings by a 6-0 score for his league-leading fourth shutout of the season.

Scott was chosen by the Maple Leafs in the fourth round, 110th overall, during the 2017 NHL Draft.

A 19-year-old from Calgary, Alta., Scott is playing in his fourth season with the Raiders, who chose him ninth overall in the 2014 WHL Bantam Draft. This season, the 6-foot-3, 183-pound goaltender is leading the league in all major statistical categories including 17 wins with a goals-against-average of 1.39 and save percentage of .950 and four shutouts. Scott recently competed in the 2018 CIBC Canada Russia Series where he represented Team WHL between-the-pipes in Game 1 in Kamloops where he made 27 saves in a 2-1 triumph.

The Raiders are back in action Tuesday, November 20 (7:00 p.m. CT) as they play host to the Lethbridge Hurricanes at the Art Hauser Centre.

The @VaughnHockey #CHL Goaltender of the Week is @MapleLeafs prospect @IceScott99 of @TheWHL’s top ranked @PARaidersHockey with two shutouts in three games along with his first career goal: https://t.co/bTpDqxkPtz pic.twitter.com/6xedhHRhFH