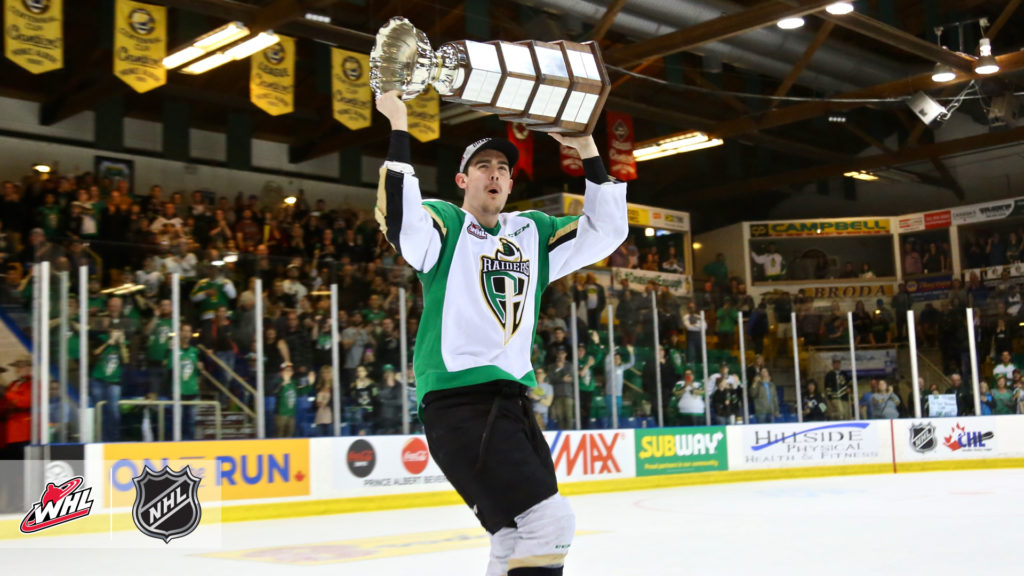 A strong season with the Prince Albert Raiders continued to reap benefits for forward Brett Leason.

Thursday, the Washington Capitals announced they had signed the Calgary, Alta. product to a three-year, entry-level contract.

The 6-foot-4, 199-pound Leason turned draft charts upside down during the 2018-19 Western Hockey League Regular Season and 2019 WHL Playoffs as the 19-turned-20-year-old continually impressed for the league-leading Raiders. In June, he was selected in the second round, 56th overall, by the Capitals at the 2019 NHL Draft.

“I think my skill and everything was always there,” Leason said at the draft in June. “My skating was always a step behind and that’s just something I really focused on in the off-season.

“The skating came together and everything fit together perfectly this year. It was a big step forward.”

He also had eight multi-goal games, including seven two-goal games. He recorded the first hat trick of his WHL career on November 20, 2018 against the Lethbridge Hurricanes.

In the 2019 WHL Playoffs, Leason came to play as well, leading the Raiders in scoring with 25 points (10G-15A) in 22 games as the Raiders captured their second WHL Championship in team history. He had three power-play goals and four game-winning goals as well.

Throughout the regular season and playoffs, Leason was recognized as the WHL On the Run Player of the Week three times while also being named the WHL McSweeney’s Player of the Month twice.

In November 2018, Leason was named to Team WHL for the 2018 CIBC Canada Russia Series and was later named to Canada’s National Junior Team for the 2019 IIHF World Junior Championship.

Leason was originally selected by the Tri-City Americans in the third round, 50th overall, of the 2014 WHL Bantam Draft. In 190 WHL regular season games, Leason has recorded 140 points (60G-80A), including eight power-play goals, nine short-handed goals, and 13 game-winning goals.

In 33 WHL Playoff games for his career, Leason has 28 points (10G-18A), including the aforementioned three power-play goals and four game-winning goals.

At the 2019 NHL Draft, Leason was named the recipient of the E.J. McGuire Award of Excellence. Presented by NHL Central Scouting in honour of the late McGuire, the award is given to the candidate who best exemplifies the commitment to excellence through strength of character, competitiveness, and athleticism.

NEWS | Capitals have signed forward Brett Leason (@Bleason7) to a three-year, entry-level contract with an average annual value of $750,000 #ALLCAPShttps://t.co/s7lypXZ1Gb

With the 56th pick in the 2019 NHL Draft, the Washington Capitals select forward Brett Leason from the Prince Albert Raiders of the WHL!#ALLCAPS | #CapsDraft pic.twitter.com/t3APgg3VS8