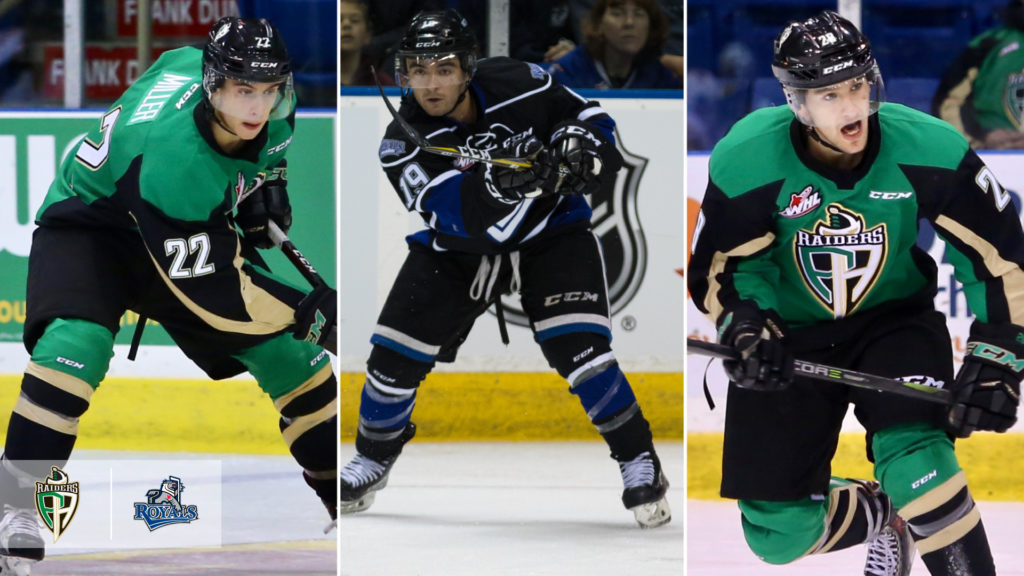 If it wasn’t clear before, it is now; the Prince Albert Raiders are going for it.

A six-piece trade between the Raiders and Victoria Royals has sent overage forward Dante Hannoun to northern Saskatchewan Thursday.

Also headed to the Royals in the deal are fourth and eighth round selections in the 2019 Western Hockey League Bantam Draft. The fourth-round pick originally belonged to the Brandon Wheat Kings while the eighth round pick was originally property of the Raiders.

“We are excited to add a prolific scorer like Dante to an already potent lineup,” said Raiders General Manager Curtis Hunt. “Dante brings speed, character, and compliments the leadership we already have in the organization.

In return, the Royals have acquired overage forward Kody McDonald, 18-year-old forward Carson Miller, and a third-round selection in the 2020 WHL Bantam Draft.

Hannoun is a solid offensive get for the Raiders, who have led the WHL since the start of the year and entered 2019 as the CHL’s top-ranked team with a 34-3-0-1 record. The 5-foot-6, 160-pound Delta, B.C. product was originally selected by the Royals with 11th overall pick at the 2013 WHL Bantam Draft. Since then, Hannoun has appeared in 286 WHL regular season games, posting 248 points (98G-150A), including 35 power-play goals, one short-handed goal, and 15 game-winning goals.

“It is never an easy decision to trade a player who has been with your club since being drafted,” General Manager Cameron Hope said. “Dante has been a tremendous player and person for our organization.

“We thank him for all he has done for our franchise and wish him success in Prince Albert.”

Heading the other way in the deal is McDonald and Miller, with the 6-foot-1, 188-pound product of Lethbridge, Alta. heading back to the B.C. Division.

McDonald was selected in the second round, 24th overall, of the 2013 WHL Bantam Draft by the Prince George Cougars. This season, he has 18 points (6G-12A), including one power-play goal, one short-handed goal, and one game-winning goal in 30 games with the Raiders. He also has 174 points (81G-93A) in 295 WHL regular season games.

“We want to thank Kody and Carson for their contributions to the team on and off the ice,” said Hunt. “We wish them the best of luck going forward in their careers.”

Also headed to Vancouver Island in the deal is Miller, a 5-foot-10, 163-pound product of Yorkton, Sask. originally selected 21st overall by the Raiders at the 2015 WHK Bantam Draft. Since then, he’s become a steady offensive presence with 47 points (20G-27A) in 156 WHL regular season games, including eight power-play goals and one game-winning goal.

Miller recorded a hat trick on opening night against the Regina Pats and has 18 points (10G-8A), including five power-play goals and one game-winning goal in 38 games this season.

The Raiders have acquired overage forward Dante Hannoun from the Victoria Royals.

📲Get the details on the Raiders App, or online here: https://t.co/wlNgw1IovD